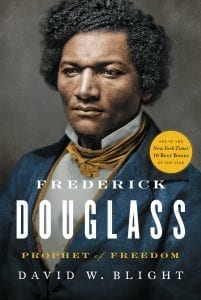 Historian David W. Blight’s biography, Frederick Douglass, Prophet of Freedom (Simon and Shuster), has captured the attention of the literary world. It is, in my assessment, simply superb. Douglass was one of the great Americans of the nineteenth century, and Blight has given us a biography worthy of such greatness. As a young, uneducated fugitive slave, Douglass began preaching to a handful of men. A decade later he was the most famous black man in the world. If America had a prophet in the nineteenth century, it was Frederick Douglass.

The most dangerous place in the world is within the gaze of a prophet of God. Prophets possess a proclivity to shatter the status quo, jerking us out of our delusions of safety and comfort. They rip away our facades of righteousness, exposing that which we prefer to remain hidden. When God sends forth a prophet into a land, things happen – and sometimes it isn’t pretty.

Frederick Douglass used the power of his words to call America to repentance for its national sin. Using language rich with the scriptures, Douglass traveled the northern states and Britain, calling for the end of slavery. Like Jeremiah, Amos, and John the Baptist, Douglass called not only the sinners and slaveholders to account, but also those who believed themselves to be righteous. No one was exempt from his fierce gaze, not even the President or members of the clergy. Douglass, like the prophets, aimed his sharpest rhetoric at those who worshiped God on the Sabbath and yet were complicit in the systemic oppression of their fellow man throughout the week.

As I read Blight’s work on Douglass, I found myself hoping God would send a new prophet to our nation, someone uniquely graced by God with words of power and fire and judgement. We need an anointed advocate for justice, someone who isn’t afraid to call out wickedness in high places. We need a voice for the poor and the oppressed, the imprisoned and the stranger among us. We need another John or Jeremiah to call God’s people to repentance. We need another Frederick.