Celebrating 20 Years of Good News: Where Are They Now?

The year 2020 is special to Birmingham Christian Family (BCF) magazine because it marks 20 years of sharing Good News with readers like you. 20 years can bring a lot of changes, so keep reading to find where past cover stories are now! You can also read the full length, powerful faith stories they shared with us over the years at www.birminghamchristian.com/issues. 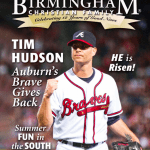 After playing baseball for Auburn University, Tim Hudson went on to play for the Oakland Athletics and Atlanta Braves. After appearing on the cover of BCF in April of 2012, he transferred to the San Francisco Giants and helped the Giants win the 2014 World Series! 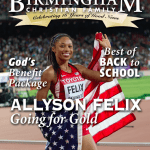 Olympic Gold Medalist sprinter Allyson Felix continues to go for gold since talking with BCF in August of 2016 about her God-given gift. She broke records in 2019 when she won her 12th Gold Medal during the IAAF Doha competition. 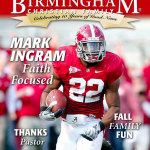 After sharing his faith with BCF in October 2010, Mark Ingram went on to play in the NFL for the Baltimore Ravens, where he still plays today. He also continues the mission of the Mark Ingram Foundation, “To enrich and contribute to the well-being of at-risk youth and families affected by incarceration through social development, goal setting and strengthening of character through sports.” 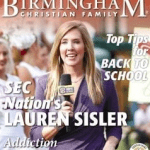 Lauren Sisler weighed in on what matters in the game of life in BCF’s August 2018 issue. Since speaking with us, Sisler became engaged to John Willard and is planning her wedding. 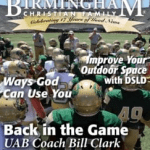 Since appearing on BCF’s cover in September of 2017, Coach Clark’s team went on to win UAB’s first conference championship in 2018. 2019 was another great year for the team. The Blazers are the 2019 C-USA West Champions and as of print are preparing to play in the New Orleans Bowl. 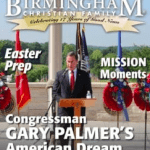 Since talking with Congressman Palmer in March of 2017, his Republican colleagues chose him to serve as chairman of the Republican Policy Committee which places him fourth in the hierarchy of Republican House leadership. “This a role in which I believe I can best serve my colleagues and my constituents, a role that my 25 years with the Alabama Policy Institute gave me the experience and expertise that will be of great benefit to my fellow members,” says Palmer. 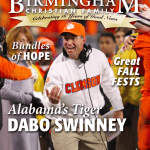 Coach Dabo Swinney appeared on the cover of the September 2016 issue. Since then, his Clemson Tigers football team has won a second College Football National Championship (2016, 2018). As of print, Coach Swinney’s team is prepping for another College Football Playoff game. 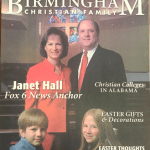 After nearly 40 years on with WBRC-TV, Janet Hall O’Neil continues to anchor weekday newscasts from 4-5:30 each day on FOX6 News. She and her husband Frank are active founding members of Asbury United Methodist where they raised their two children, Allie and Jack. Allie is now working at a non-profit in Washington D.C. where she researches grants for international development. Jack is an engineer in Nashville and is engaged to be married this summer. Janet says, “I am blessed to have a long journalism career in my hometown, a wonderful marriage, children who have grown into outstanding adults and a loving church family that strengthens my faith every day.” 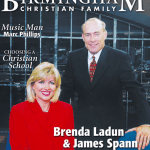 “We have got to come together as a Christian community, and a publication like (ITALIC)Birmingham Christian Family is the perfect way to do that,” says James Spann who was featured on the cover of BCF in August 2000. Since being featured, Spann has won several awards including National Weather Association’s Broadcaster of the Year. 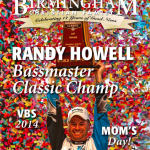 Since BCF talked with Randy Howell in May 2014, he continues to partner with the King’s Home to help women and children in our community. 2019 marked the ninth year for him to provide the boat for the Campfire for the King Boat Giveaway which raised more than $200,000! 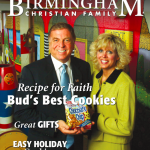 Bud Cason, founder of Birmingham’s Bud’s Best Cookies, was on the cover in December of 2004. In April of 2012, at a special meeting of employees and management, Bud announced that he was promoting his son, Al, to company President. Bud remains CEO and Chairman of the Board. Be one of the first 250 guests at the Celebrate the Family Expo to receive a free bag of Bud’s Best Cookies! 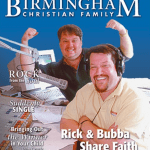 After appearing on the first cover of BCF in July of 2000, Rick & Bubba continue their radio talk show, the Rick & Bubba Show, and are celebrating their 20th anniversary! 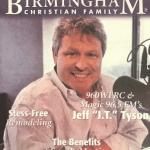 “Thank you Jesus for all you have given me and please keep directing me in the direction you would have me best glorify You!” says J.T. Nysewander as he shares changes since he appeared on the cover August 2006. He and wife Judy were able to cheer their son Michael on as he played football at the University of Alabama and was a part of three National Championships and three SEC Championships under Coach Nick Saban. He now coaches running backs at Samford University. Daughter Alex also graduated from Alabama and teaches 5th grade at Mountain Brook Elementary. J.T. adds “Judy now drives a school bus for Hoover Schools and loves it!” while he enjoys hosting “Alabama’s Morning News with J.T.” 6-9 a.m. on 105.5 WERC in Birmingham and on MAGIC 96.5 FM every weekday afternoon 2-7 p.m. 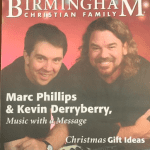 In December of 2003, BCF talked with Kevin Derryberry and Marc Phillips. Both had experienced successful secular music careers, and both chose to also use their musical gifts to praise God. Today Kevin Derryberry Ministries (KDM) hosts LIFETECH events that minister to men preparing to be released from prison and to date thousands have come to faith in Jesus. Marc Phillips’ recent music project, “Pouring It Out On Me” features songs that ministered to him as he battled throat cancer as well as original songs about the experience. He also leads children’s worship at Double Oak Community Church on Sunday mornings and leads worship at Grace Point Church in Pelham on Tuesday night as well as overseeing an after-school music program for children living at King’s Home. He is also wrapping production on the recording of the audio version of fellow BCF cover story, Sherry Burgess’ book, Bronner: A Journey to Understand, available in early 2020. Hear Phillips and Derryberry perform songs from their latest projects at the Celebrate the Family Expo! 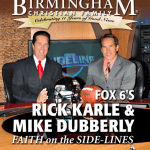 Rick Karle and Mike Dubberly were featured on the cover of BCF in September of 2011, both at the sports anchor desk. Today they are both anchoring the morning news. Karle is a brand-new member of the WVTM-13 morning team after 38 years as a sportscaster. Karle also celebrates continuing being cancer free for 32 years! Dubberly has been a part of WBRC’s Good Day Alabama team since 2012. He shares, “It’s been a blessing to be part of this top-rated morning show for so long.”

When BCF featured the Whitlock family on the cover in September 2007, Mark Whitlock, Jr. was only sixteen years old. Today he carries on his father’s legacy of helping others enjoy God’s great outdoors by running Mark’s Outdoors in Vestavia. “My dad ran this store for over 32 years. He was the only person that I know who truly loved his job and would rather be working than at home relaxing. There was nobody else like him. I stepped in once I graduated college and have been here for 5 years now. My mom, Dana, and I, are still here and running the store. I handle the sales floor while Mom handles the financials. We have a few big plans for 2020 so be sure to keep tuned-in!

Artist Daniel A. Moore Continues to Paint Seeds of Light 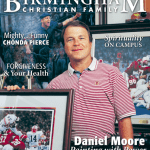 This past spring, Daniel Moore (BCF Sept 2001) was inducted into the Alabama Sports Hall of Fame as its “2019 Outstanding American Sportsman.” His recent works include paintings of Najee Harris and Jalen Hurts and he is working on preliminary research and preparation for a painting that pays tribute to Tua Tagovailoa’s collegiate career at Alabama. “I love Tua’s great testimony and his enthusiastic love for the Lord. I look forward to including his story in a gospel tract that we will print to accompany each print,” Moore shared. “I enjoy using my talents for sowing these ‘seeds of light.’” 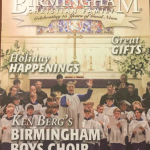 The Birmingham Boys Choir graced the cover of BCF in December 2014. “The choir just keeps getting bigger and better every year,” says Music Director Ken Berg. “We have 150 plus boys right now from 50 different schools all over the city.” Berg is now in his 42nd year of leading the choir and in December the choir performed its 42nd Annual Christmas Concert at Briarwood Presbyterian Church. 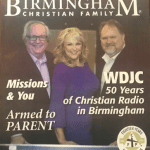 WDJC’s Roxanne, Justin Brown, and Terry Patilla all appeared on the cover of BCF in April 2018 as a part of WDJC’s 50-year anniversary. Roxanne was recently recognized as one of the Top Women in Alabama Media and now hosts mornings with radio veteran Ace McKay. Patilla continues his popular “Sundays of Praise and Brown has teamed up with 7-year-old daughter Abigail to produce several commercials that have not only aired on WDJC but have also one international recognition. 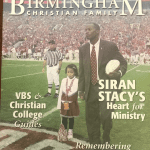 BCF talked with Siran Stacy in May of 2009 after he tragically lost his wife and four of his five children in a car accident in 2007. Since then, Stacy went into full time ministry. “Over the last 12 years, I’ve been asked to speak at churches, schools, military branches, corporate businesses, retreats, and non-profits just to name a few. On September 21, 2013, I married an amazing woman of faith, Jeannie Marie Petty. God did it again, I fell in love again. We have three children together: Julia Marie Ellie (4 years old), Savanna Grace (2 years old) and Jasmine Anna Rose (6 months old). Shelly is 16 years old now. The grace of God over my life continues to open new doors and opportunities for His Kingdom purposes. I’m thankful for all the support and prayers bestowed upon myself and ministry. I know so many have prayed for me over the years and if I can ever return the favor send me an email through my website at www.siranstacy.org. To God be all the glory.”

To celebrate 20 years of Good News, BCF wants to hear from you! What is one of your favorite BCF cover stories? Join us on our Facebook page to let us know. We also hope you will make plans to join us at the Celebrate the Family Expo on January 11, 2020 where many of our past cover stories plan to be a part of the celebration, www.birminghamchristian.com/expo.