“Adversity is either going to define you, destroy you or develop you,” says Dabo Swinney, entering his eighth full season as head football coach at Clemson University. “If you have the right mentality, you can take the adversity in your life and turn all those things into a positive.” 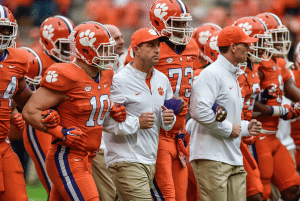 Born in Pelham, Ala., in 1969, Swinney can remember a time when I-65 stopped in Hoover. His father, Ervil, owned an appliance repair shop in town, and he spent Sundays during football season watching “The Bear Bryant Show” with his three sons, including Dabo, the youngest. His mother, Carol, was a substitute teacher at area schools. Swinney was named center on his flag football team in the second grade and played three different sports for the Pelham Panthers in his youth.

By the mid-1980s, however, trouble hit the Swinney family in more than one way. At 16 years old, Swinney’s older brother Tripp was thrown through a car windshield in an accident, and his head injuries resulted in memory loss that took time to restore. The once fun-loving Ervil struggled with finances and alcohol abuse, which made him violent. “Life comes at you really fast sometimes, and sometimes young people deal with a lot of adversity,” Swinney says. “But we’re all going to deal with lots of adversity at some point. For me, I had some difficult experiences as a young person. I saw things that I probably shouldn’t have seen, but as I matured and grew into my life—or in particular as I became a Christian—God over time revealed His plan for me.”

Swinney sought guidance from Stewart Wiley, a youth football coach who started Fellowship of Christian Athletes (FCA) at Pelham High School. At age 16, Swinney heard University of Alabama receiver Joey Jones speak at an FCA event and accepted Christ as his Lord and Savior. “I nailed it down. Since that time, I have always had that peace,” he says. “It’s given me that compass for my life, an anchor for my life. As the storms of life came—and boy have they come strong—I had this conscience that I didn’t have prior to being saved…. I had this voice inside of me. It always kept me centered.”

Swinney’s parents divorced his senior year, and he and his mother became essentially homeless. They slept on friends’ couches, at grandma’s house, sometimes in the car. When he moved to Fontainbleau Apartments in Tuscaloosa in 1988 to attend college, Swinney took his mom with him. They shared a room and a bed. She drove to Birmingham during the day to work as a sales clerk at Parisian department store.

A wide receiver for Alabama, Swinney remembers Coach Gene Stallings as a leader who provided an atmosphere conducive to spiritual growth for players who were interested. He attended team small groups and worshipped at Tuscaloosa First Baptist Church. He also looked up to his peers on the field.  “I had teammates that were great examples to me as a young person that certainly were further along in their faith than I was—guys like Jay Barker and Mickey Conn. Guys that I thought were really living life the way we should all live.”

By the time he finished college, Swinney had reconciled with his father. He worked as a graduate assistant under Coach Stallings then as part of Alabama’s full time coaching staff. In 2003, he joined Clemson as a wide receiver coach. He was named Tommy Bowden’s replacement as head coach in 2008 and since then has coached Clemson to a 75-27 overall record, with top-15 final rankings in the polls in 2012, 2013 and 2014. Last year he took the Tigers to the brink of winning the program’s second National Championship-losing to his Alma Mater, the University of Alabama 45-40.

Swinney reflects on the lessons of his youth when facing new trials today. He says he and wife Kathleen lost two pregnancies to miscarriage—one at 14 weeks and one at 11 weeks—before having their three children. Kathleen’s sister died in 2014 at age 49 following her second bout with cancer. Sober, remarried and back to his gregarious self, Ervil worked at M&M Hardware in Alabaster until his death in 2015. “I’ve learned patience and appreciation and just lots of things through the lessons that Christ has taught me using life. Without that spiritual foundation, you miss that. That’s one of the problems of the world—people don’t have that anchor, so when those storms of life come, they turn to other things, and those other things never can bring the peace. Never. They just leave you empty and lead to more problems.” 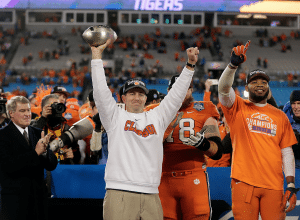 tough times. Reflecting on his upbringing in Alabama, he says God placed the right people in his life to give him the encouragement he needed to rise above hardships at home. “God kind of puts lighthouses along the way, along your journey, because sometimes we’re going to run ashore. Maybe it’s somebody at the grocery store, a teacher, a friend. Maybe it’s a teammate or a coach. A lot of people knew my circumstances and saw something good in me and knew that I was working hard, trying to become the best I could be. I always tell people it takes a village to raise a child, because that’s what it took to raise me.”

Peace for Swinney doesn’t come from a scoreboard, a bank account or any guarantee that all his hardships are behind him. Peace comes from knowing Christ. “You will never know the purpose of your life until you know the Creator of your life,” he says. “His plan is always bigger and better than what my plan is, and He has taught me that time and time again.”