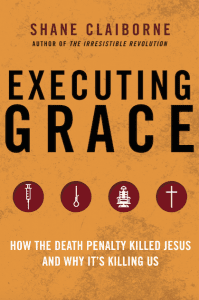 Bad theology can get people killed. I know this because I live in the state of Alabama. No, our state has not been attacked by terrorists motivated by a twisted religious ideology. But right here in the Bible belt, in a region that has multiple churches in every neighborhood, the State of Alabama recently took a man and killed him by injecting him with a lethal dose of drugs. He was despised and rejected. He was deemed as the least among us and unfit to receive our mercy. He was someone’s son, friend, and family member – and we strapped him down and killed him. And judging from the non-response from most pulpits and churches, most of us are theologically okay with our government not turning the other cheek, not loving mercy, and not walking away with our stones left un-thrown at sinners. Like I said, bad theology kills

In his latest book,  Executing Grace (HarperOne), author Shane Claiborne invites all of us who value human life as a gift from God to be consistent with those values. It is a powerful critique of capital punishment from a Christian perspective, countering every point used by those who advocate for the death penalty on biblical grounds. No argument is left unanswered as Claiborne explains, point by point, how the death penalty is inherently incompatible with the teachings of Jesus. It is, quite simply, a masterful work

In 1553, Sebastian Castellio heard the news that Reformer John Calvin was complicit in the execution of Michael Servetus, who was burned to death due to his unorthodox views regarding the Trinity. In a scathing rebuke to Calvin for this outrage, Castellio penned his famous words, “To kill a man is not to defend a doctrine, but to kill a man.” Executing Grace reminds us that Castellio was right. Calvin, like our state officials, may have had the civil and Mosaic law on his side, but he most certainly did not have Jesus. Jesus has always been about life, not death. He is about forgiveness, not retribution. If we are serious about being his disciples, we should follow his example. As Christians who live in Alabama, we are called to be vocal advocates of grace and life, not judgment and death.