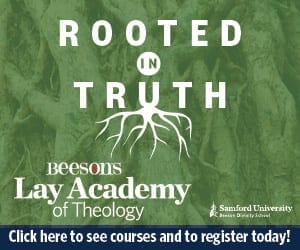 When Lew Burdette was in first grade, his mother signed him up for a Bible memory class every Monday after school. Alone with 12 girls and a teacher when all he wanted to do was go outside and play ball, it felt like torture. As a high school sophomore, however, he would call on those memory verses in a moment of dangerous desperation. Kidnapped; violently beaten, stabbed, and shot; and left in the bottom of a well in rural Alabama, he recited those childhood verses out loud, certain death would come. Now the President of King’s Home, Burdette has dedicated his career to helping Alabama women and youth whose history in some ways mirrors his own—loss of hope, pain, abandonment, and abuse—with hope in renewal through Jesus Christ.

Burdette grew up in Roanoke, Ala., a small town 40 miles north of Auburn. His father owned a grocery store, and a family business meant Burdette was sacking groceries while his friends were watching Saturday morning cartoons. The community was tight-knit, and he and his three siblings knew everyone that came in to shop at Burdette Food Store. “I just wouldn’t give anything for growing up in a small town. I grew up with a strong work ethic, for sure,” he recalls. “My strongest memories are growing up in church. Every time the doors were open, my mom made sure we were there. Part of my testimony is I can never remember a time in life when God wasn’t important to me, even as a little kid.” Burdette says Camp Sumatanga in Gallant, Ala., also played a pivotal role in his young faith. He came to know Christ more specifically as his “personal Savior,” he says, while at camp on a youth retreat weekend in February 1974. Ten months later, he would draw on that faith in a way he’d never imagined.

On December 27, 1974, Burdette convinced his father to let him leave work early for a date. He was walking through the alley behind the store when he was kidnapped at gunpoint, driven to a remote area, violently beaten with a gun and stabbed in the chest and back with a knife, then thrown into an abandoned well. Originally told he’d be held for ransom, Burdette was 30 feet underground, freezing in the mud and trying to keep his head above water. His assailants threw bricks in to try to cover him up, then started firing. The first three shots missed. The fourth hit the back of his head. Left for dead, he spent hours screaming and desperately trying to climb out. “It’s still vivid to this day. The flood of emotions as a teenager trying to wrap my head around dying and what that meant was a pretty overwhelming couple of hours,” he recalls. “Deep sadness and crying out to God, ‘Why me, God? How could this be happening?’ After a while, I just began to think, this is just such a silly way to die. If I’m going to die in the bottom of this well, why am I feeling sorry for myself and questioning God? So, I began to really focus on what a wonderful life I had really lived, if only for 15 years.”

Weak and desperate to remain conscious, Burdette turned to the Bible verses learned in his childhood, particularly Psalm 23. He sang “How Great Thou Art” and “Amazing Grace.” Miraculously, he eventually found the strength to use holes in the side of the well to climb out. Doctors and nurses gave him a 5-10 percent chance of living until morning. “My mom, being so faithful, put out prayer chains all over,” he recalls. “I got 300 or 400 letters from mostly across the southeast… and I still have them. Some of the letters that I got said, ‘You don’t know who I am, but I was praying for you. I heard about what happened and was contacted to pray for you.’ How comforting and reassuring that was.”

After his recovery, Burdette went on to become a finance major at the University of Alabama and planned to go to law school after working on a political campaign just out of college. Instead, he felt a call to ministry and became the Director of Christian Education at First United Methodist Church in Florence, Ala. In 1985, he began a 13-year career with Books-a-Million, eventually becoming Executive Vice President and Chief Operating Officer. Before joining King’s Home in 2002, he also founded Kindred, a Christian retail superstore in Birmingham. Burdette says everything learned working in retail prepared him for his role in ministry today. “Everything we do revolves around keeping Christ in the center of everything. We start every day with prayer and devotion…. And that is so important, but as a ministry it’s also important to be good stewards of what God has blessed us with, and that’s running it like a business. And so, we do that. We are very good budgeters. We are good operators as far as being good stewards with every penny.”

King’s Home operates 22 Christ-centered homes in four Alabama counties where women and youth can flee domestic violence and start over in life. The King’s Ranch serves boys and girls age 10-21 years old; 98 percent have been abused, and many struggle with behavioral problems and are at least one grade level behind at school. In addition to the King’s Ranch, King’s Home also operates Hannah Homes, serving women as well as mothers with children escaping domestic violence. Returning to his retail roots, Burdette’s latest opportunity as President of King’s Home has been the acquisition of three area thrift stores formerly owned and operated by Jimmie Hale Mission. Located in Eastwood, Pinson, and Hanceville, the retail shops are now named King’s Home Thrift: The Better Store, and all profits go directly to helping women and children transitioning toward peace and independence through King’s Home services.

At King’s Home, residents have a consistent, safe, loving home. They learn how to be successful at school and in relationships. They have a chance to find consistent employment and save money for the future. They have access to a community garden, a ceramics program, and a horse farm. “We want to be there to stand in the gap in a time in life when they need help the most. Jeremiah 29:11 is real; God has a plan and a hope and a future for your life,” Burdette says. “What you have experienced is horrible, and nobody should ever have to experience that, but now that you’re at King’s Home, you have every opportunity in the world to be successful. Dream big.”

Scroll back to top