Logging nearly one million viewers on social media every week, Jermaine “FunnyMaine” Johnson is best known in Alabama for his college-football YouTube series “How Bama Fans Watched.” The Birmingham, Ala.-based viral video personality and stand-up comedian is also a blogger, a graphic designer and an afternoon co-host on 97.7 JAMZ. In all these endeavors, he is recognized for his big smile and a silly style that pokes fun at sports, southern trends and nightlife. Preparing for a four-day set at the StarDome Comedy Club in Hoover, Ala.(www.stardome.com) in November, FunnyMaine explains how his focus is on encouraging others and trusting in God for continued success as God sees it.

The youngest in a house full of boys, FunnyMaine says his childhood in Opelika, Ala. included scouts, music, and a lot of church. “My dad was a pastor; he started off small. He actually had a service in the living room then purchased a small building, then a bigger building, then another building,” FunnyMaine remembers. “I got to see it grow, and I know firsthand all the challenges that come with being pastor of a church. You’re dealing with so many different personalities, so many different opinions, but I’ve seen my dad stand strong in what he believes and how he wants to do stuff. He’s still in it years later.”

FunnyMaine says his father’s strength also stood out in family tragedy. When he and his brothers were all under the age of 10, their mother died from medical complications related to lupus. “My dad was straight up and honest with us…He just told us, you know, this is what it is. We love her, she’s gone, but we’ve got to keep pressing forward. We’ve got to live our lives. That’s what she wanted. He was very upfront about it, and he encouraged us not to be afraid to miss your mom. Cry when you have to,” FunnyMaine recalls. “Then he remarried, and God blessed me with another motherly figure in my life. He definitely stepped up to the plate.”

A self-professed class clown, FunnyMaine’s family moved to Pratt City, where he graduated from Jackson-Olin High School. At Stillman College in Tuscaloosa, FunnyMaine studied mass communications, served as drum major and student recruiter, and hosted basketball games. His first time on stage for stand-up was a favor from a friend. His fraternity brother was working as a disc jockey at a back-to-school comedy show for UAB in 2005. After a five-minute set, FunnyMaine received a standing ovation. Since then, he has opened for celebrities including DL Hughley, Rob Schneider and Tom Green. He has performed in front of sold out audiences at The Looney Bin in Little Rock, Ark.; The Mint in Los Angeles, Calif.; The Punchline Comedy Club in Atlanta, Ga.; and Zanie’s Comedy Club in Nashville, Tenn.

Leaning into social media platforms on Twitter, Facebook, Instagram and YouTube, FunnyMaine launched his first “How Bama Fans” video on Facebook in September 2016, and the series averaged 1.8 million views per week through the end of the football season. Each segment is two to five minutes long and walks viewers through the facial expressions and verbal banter likely shared among Crimson Tide supporters during the previous Saturday’s college football matchups. Poking fun at underdogs, impressive plays, controversial calls and upsets, the marriage of football and comedy simply works. “It’s more than just a culture in Alabama. It’s something we decided a long time ago. This is our thing,” he says. “We’re good at it. We’re passionate about it. And I think everybody loves to laugh.” FunnyMaine says Birmingham has been particularly responsive to his material. “With the StarDome being here in Hoover for over 30 years now, I think we’re a comedy smart city. We’re a football smart city. When you put the two together, it seems like it was destined to be a win-win.”

FunnyMaine admits that a career in the comedy industry hasn’t been without struggle. He has experienced a repossession and an eviction. However, it was a grief he is thankful came with patience that was perhaps a gift from God. “It didn’t break me. It actually just made me stronger,” he remembers. “I realized nothing is going to be given to me. If I want to get out of this hole, if I want to change things, if I want to do all this great stuff that I feel like I can do, I’ve got to go harder. I’ve got to step it up a notch. And that’s what happened.”

Aside from the stage and social media, you can find FunnyMaine sharing his faith at churches, including The Worship Center where he has been a member since 2011. His message typically touches on avoiding the negative influence of a culture often focused on determining who is right and who is wrong. Initially, he explains, this lies in politics. But ultimately, it’s something more. “The bigger problem is we don’t know how to disagree anymore. We don’t know how to have conversations with people we don’t agree with, people who don’t live where we live, people who don’t look like we look, people who don’t worship like we worship. Can you imagine living in the world where you’re surrounded by people who just agree with you? And everybody does what you do? How can you ever learn in that? If everybody around you agrees with you, you’re not putting yourself in a position to learn anything.”

For wisdom and encouragement, FunnyMaine turns to Scripture.“I love Psalm 62; it’s a chapter to me that’s about believing 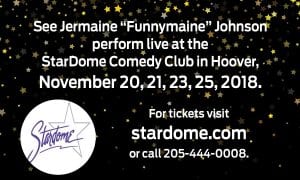 in God vs. trusting in God. I think a lot of us have got the believing part down, but we don’t have the trust part down. That’s what I try to work toward–trusting in God and not just believing in God.” For FunnyMaine, he’s trusting that God will continue to create opportunities for his personal and professional growth, but also that God will help all men and women appreciate their differences instead of see differences as walls that divide. “I am also just believing and trusting in God that it can happen. Sometimes you go speaking positivity and people say, ‘You’re crazy, you should give that up.’ You’ve gotta be crazy enough to believe that change can happen.”