After retiring from the NFL, Tide National Football Champion (1992) and Super Bowl Champion (1996) Sherman Williams was sentenced to 15 years in prison on drug and counterfeiting charges. Released in 2014, he now helps Alabama youth and former inmates find freedom in Christ.

There was a time when Sherman Williams would sit on the roof of his mother’s house in Pritchard, Ala., holding a .22 caliber rifle. Wary of rumors of a possible drive-by shooting in his neighborhood, he was 16 years old and no stranger to gang activity. His parents had divorced when he was in the third grade. The youngest of four children being raised by a single mother, he had a passion for academics, but his peer group was bent on smoking, fighting and hustling drugs.

Despite his rebellious nature, Williams was a remarkable football player. He became the first running back in Alabama high school history to rush for more than 3,000 yards in a single season. An LSU fan for much of his life, he initially committed to play for the Tigers, then changed his decision to the University of Alabama. “It was their tradition, the winning atmosphere, the camaraderie, the coaching staff—everyone made me feel like we were going to actually win a championship,” he remembers.

In Tuscaloosa, Williams lived with David “Deuce” Palmer, who grew up in Birmingham and joined the Tide with Williams in 1991 to play for Coach Gene Stallings. Williams scored the first touchdown in the Tide’s 1993 Sugar Bowl victory over the Miami Hurricanes. He also secured a Citrus Bowl win over Ohio State when he caught a pass from Jay Barker and ran 50 yards for a touchdown with only 42 seconds left in the game.

“My mother was a faithful Christian woman,” he remembers. “I did vacation Bible studies in the summertime when I was a young kid

went on church picnics, played church teams in softball. Christ and faith and God was always heavily preached in our household. That was the foundation that gave me the strength I needed to make it through those 15 years,” he says. “But I had some ups and downs—having faith and knowing that God is real but choosing to let the flesh overtake the spirit, or being disobedient and suffering the consequences. When I was serving that time… I was able to form that bond and that relationship with our Lord and Savior Jesus Christ. It gave me the inspiration I needed to carry on and be the person that I am today.”

Throughout his imprisonment, Williams stayed in touch with former teammate David Palmer. Before Williams’ release from prison in 2014, the two developed a plan to give Alabama youth the tools they need to avoid the pattern of self-destruction often prevalent in neighborhoods defined by poverty and crime. To avoid the mistakes of his past, Williams says, young people need to be ushered toward God, education, personal responsibility and respect.

Williams also has a heart for adults exiting the prison system. This month he will speak at a fundraising banquet at Briarwood Presbyterian Church for Shepherd’s Fold, a Birmingham based prison re-entry ministry. “We focus on recovery and re-entry from the inside and out,” explains Shepherd’s Fold Executive Director Jack Hausen. “Sherman Williams fought his way through life to achieve a pinnacle of success that is only a dream for many. He inspires men and woman to strive for success, teaching them how not to make poor decisions that will affect them for the rest of their lives.” Williams says he has found new purpose in sharing his story of how a childhood compromised by delinquency forged a path to prison—then God forged a path to freedom. “My story is a testimony to what it would take to become a professional and also a testimony to what it would take to become a prisoner. You can learn from my story on both sides,” he says. “My life purpose is to be a benefit to others, to help others become the people that they would like to be.” For more information on Williams’ appearance in Birmingham October 20 and attending the event, contact Shepherd’s Fold at 205-780-6211 or dedra@sfalabama.org. 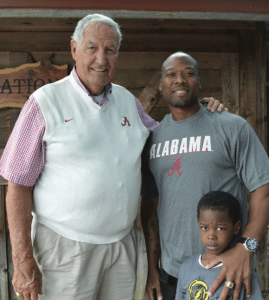 “Gene Stallings is one of the great influences and motivators in my life,” says Williams, who took his youngest son Sebastian (5) to meet his former coach at a reunion in Tuscaloosa last summer. Courtesy: Crimson Tide Photos/UA Athletics