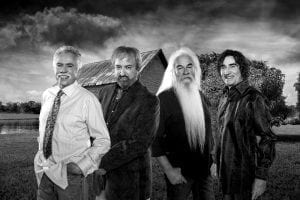 When the Oak Ridge Boys take the stage in Birmingham on August 6, the patriotic spirit the band shares will be on full display along with their resilient faith that bass singer Richard Sterban says has kept the band going strong after 40 plus years of touring.

The band truly has transcended time with their songs “Elvira” and recently “Sweet Jesus”. Band members Duane Allen, Joe, Bonsall, Lee Golden, and Richard Sterban have even recorded with the famous Merle Haggard and share a special relationship with former president George H. W. Bush. “Our band has played for every U.S. president since Jimmy Carter excluding the current one,” Sterban said. 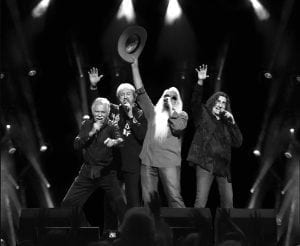 their music. When a fan attends any show featuring the band they know they will get the absolute best from Joe Bonsall’s nonstop energy to Richard Sterban’s beautiful voice. “You can expect everyone from grandma and grandpa down to kids of all ages to experience good family entertainment when we perform,” Sterban said.

The band really is “American Made” like their song says and all have been able to carry the Christian principles they learned growing up into their adult lives. These principles are evident in how they conduct themselves in such a positive manner. “We are very patriotic guys, we honor our country and our troops,” Sterban says, “We try to stick to very positive lyrics and avoid the negative refrain you often see in the music industry today.” See the Oak Ridge Boys give a legendary performance at the BJCC August 6. For more details visit www.ticketmaster.com