“God didn’t promise days without pain, laughter without sorrow, sun without rain, but He did promise strength for the day, comfort for the tears, and light for the way.” – Unknown

Looking at Kevin Sorbo’s credits—actor, producer, writer, director and star in more than 45 movies in the last nine years—you might think he has always lived a charmed life.  He is handsome, strong, talented, and intelligent. He has a beautiful wife, actress Sam Sorbo, and three wonderful children: Braeden, 13, Shane, 11, and Octavia, 9. But life is not a fairytale and no one knows that better than Kevin.

In what is probably his best-known role, Hercules—the mythical character said to be strongest of all mortals—Kevin fought monsters and evil warlords. However, it was a health crisis that led Kevin into a real-life battle after an aneurysm and three strokes almost took his life in 1997. With God’s help, true courage and great strength of character, he has conquered, persevered, and become even stronger. “I’m more patient now and I appreciate each day I have,” he says. “We think we are in control, but we are not.”

VOICE OF CAUTION At the time of the strokes, Kevin was in his 30s and in the best shape of his life. He was filming Hercules and hitting the gym daily for strenuous two-hour workouts. Yet, he had noticed intermittent tingling and pain in his left arm and hand for several months. When things worsened, he consulted his physician and realized the doctor was concerned. He told Kevin he needed a biopsy. But, in an effort to mitigate the severe pain, Kevin decided to see his chiropractor. That was where everything went wrong. As Kevin tells it, while the chiropractor was massaging his neck he twice heard a voice speak, “Don’t let him crack your neck.”

“I was arguing with this voice in my head,” he says, “then, sure enough he [chiropractor] cracked my neck.”  Within five minutes, Kevin’s vision blurred and he was unable to focus; he felt confused and noticed something almost like an electric pulse going off in his brain. This was the start of his first stroke, but, still in denial about what might be happening, Kevin managed to drive himself to the home where Sam (then his fiancée) was living. He tried to assure her he was fine, but then his speech began to slur and they rushed to the hospital. Later, they would learn he’d suffered three strokes and he had an aneurysm in his shoulder. It had ruptured when his neck was cracked, sending clots down his arm. Kevin would later reflect that it was God’s voice he heard cautioning him that day. When pe 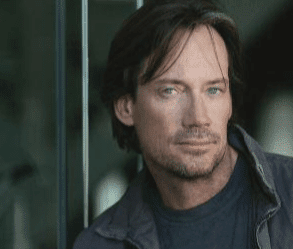 ople ask what he learned from the experience, he says, “I learned that I should listen to that voice.”

Doctors helped save Kevin’s life, but it was only the beginning of a three-year struggle. “There was this noise in my head, nausea, constant vertigo that made me feel as if I was falling backward all the time, and migraines. It was rough,” Kevin recalls.

During this challenging time, Kevin’s faith and support from Sam helped him through dark days. Sam says, “My faith was stronger than I was. It was my faith that carried me through.” Both were Christians at the time of the strokes. Kevin, who was raised in Mound, Minnesota, by Christian parents, says “I grew up in a Lutheran church and it’s always been part of my life.” At age 13, he went to a Billy Graham Crusade and responded to an altar call there, and he looks back on this as part of his faith walk.

SPREADING HOPE Today, Kevin is well and continues to entertain audiences with his great acting skill. He is not afraid to use his talents to share his faith. Recently, he played the domineering atheist professor in the movie God’s Not Dead. The film’s message, affirming God’s existence and the importance of belief, resonated with him. Though an independent movie, God’s Not Dead was a huge box-office success. This indicates to Kevin that the public wants more such movies. Recently while attending a charitable event, he says, “I had no fewer than 100 people come up to ask me for a photo. Eighty percent of these people didn’t say ‘Hercules’ or ‘Andromeda.’ They said, ‘Thank you for doing God’s Not Dead.”

While Kevin works on a variety of projects, he continues to choose some independent films with positive messages of help and hope, including the recent release from Pure Flix, Hope Bridge, which looks at the devastating impact of suicide on those who have lost a loved one. “The title, Hope Bridge, is a metaphor that you have to make that change within yourself and want help because there are people on the other side wanting to assist you,” says Kevin, who plays a counselor helping a teen struggling in the aftermath of his father’s suicide. Sorbo’s wife Sam is also in the movie. Though she’s not actively seeking parts, this opportunity spoke to her. “I think this movie will bring to light the conversations that need to take place and maybe save lives,” she says.

FAITH & FAMILY FIRST Sam Sorbo was an actress with a promising career when she and Kevin met on the set of Hercules. The two immediately hit it off and soon were engaged. But after Kevin’s strokes, Sam realized two careers and long-distance separations weren’t an option, so she willingly exchanged professional success for a successful marriage. The couple has been married for almost 18 years. Kevin believes one of the keys to a good marriage is listening. For Sam, it’s commitment and getting priorities straight. “I put everything in the proper order: God, family, country. As long as I stay true to that order, I won’t be led astray.”

While travel is a big part of an actor’s work schedule, the couple made an agreement, before marriage, that they would not spend more than two weeks apart. This often means the family travels with Kevin, and homeschooling makes this possible. “My oldest is almost 14 and I realize that in four more years he is off to college. It goes by so quickly. I want to give them a good moral foundation,” says Kevin who often works at home when not on set. “I’m always working on the next script to produce, or star in or raise money for, but if they come into my office to talk, I just push back what I’m doing and listen to what they have to say.”

Both Kevin and Sam support each other’s work. In addition to teaching her children, Sam has a radio program, the “Sam Sorbo Show,” which is about politics and religion. Kevin says, “I think she’ll have a political career up the road. She is smarter than me.” Sam says, “Kevin’s the most wonderful man I know. We have a marriage that works, and he’s the best father I could ever hope to have for my kids.”

Along with his emphasis on God and family, Kevin makes time to give to others. Since 1997, he’s been spokesperson for World Fit for Kids (www.worldfitforkids.org), an afterschool mentoring program that focuses on giving the most disadvantaged children guidance to become physically, mentally, and emotionally fit. “We’ve worked with an average of 12,000 kids per year for the last 18 years. We have a 98% graduation rate.” Sorbo goes to Washington, D.C. every year and speaks to Congress about the program. “I’d like to see the program in every city in the country, but so far that hasn’t happened. But at least I’m doing my little part in L.A.”

Kevin Sorbo is a fighter. Whether pushing for better opportunities for disadvantaged kids or working to be the best dad and husband he can be, he continues to be a conqueror. As he looks back on his brush with death and recalls that difficult time, he is able to say: “This is the message; this was something that I needed to go through in order to grow.”