Imperfections Crafted into the Extraordinary

Brought to you by: Molly Maid of Birmingham, www.mollymaid.com/birmingham

“And we know that in all things God works for the good of those who love Him, who have been called according to His purpose.” Romans 8:28

Grey Darrah, one of the first boys to live at Big Oak Boys’ Ranch, is a certified professional photographer specializing in timeless portraiture. As an overall skilled craftsman, he also makes beautiful wooden vessels. Darrah said of his craft, “You can take a piece of wood and turn it into a bowl or a vase but it’s the ones that as you start digging deeper and deeper in the wood, you find these crevices and occlusions running through them – imperfections. But it’s what makes them so special and so particularly beautiful.”


As a husband, father of three grown children and grandfather of four grandsons, he understands this illustration in a personal way. Darrah was 14 when he arrived at Big Oak Ranch, a Christian home for children needing a chance. Big Oak was just beginning and so was God’s rebuilding work in Darrah’s life.

At Big Oak, Darrah found family. He found safety and a place to belong. He found consistent examples, stability and loving discipline. He found a relationship with Jesus and lasting purpose. God took the imperfections of Darrah’s life and crafted something extraordinary.


Darrah has been married to his wife Kaysi for 37 years. As a Marine veteran, he passed on to his children a love for our country and for serving something greater than oneself. Of their three grown children, one son is a dentist, their daughter a speech therapist, and their second son, a graduate of the United States Naval Academy. But, more than that, their children didn’t know the same cycle of pain that Darrah did. They have also found a relationship with Jesus and are raising children of their own in Christian homes.

The art that Darrah makes today will be handed down from generation to generation. Much like the work that was done in his life at Big Oak Ranch. To hear more of Darrah’s story, click here. † 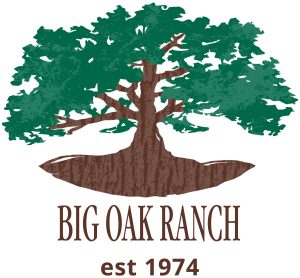