Best known for his roles in Northern Exposure and My Big Fat Greek Wedding, actor John Corbett is no stranger to the plight of refugees revealed in his latest film All Saints. He grew up the only child to a single mother who worked for minimum wage in a hospital supply room, living in a two-bedroom apartment in West Virginia with a host of neighbors from Vietnam. Immigrants, the neighbors didn’t speak English, worked in local restaurants and often fit 15 people in an apartment the same size as his. Corbett still recalls the concern he felt toward their struggle to be accepted and to succeed. In All Saints, Corbett portrays Michael Spurlock, an Episcopal pastor who risks his family’s future to support a group of Burmese refugees when his church is on the verge of financial collapse. Based on a true story, Corbett says the film is an example of the kind of compassion he has strived for his entire life.

As Corbett navigated the diverse neighborhood of his youth, he also attended a small Catholic school for grades 1 through 12. “We went to church every day; we had to wear little dress pants and shoes and white shirts and clip on ties,” he remembers. “Becoming an altar boy gave me a work ethic in life. At a young age, I had to be at the rectory at a certain time getting my vestments on, preparing things.” After high school, Corbett moved to California to join his father in work as a welder and a boilermaker. When an injury forced him off the job, he enrolled at Cerritos College, located between Los Angeles and Long Beach. “I coincidentally met some young actors, right out of high school, who were goofing around in the cafeteria one day. We shot the bull for about half an hour, and they invited me to see their improv class. That was 1984, and I had never seen anything like it. I decided to drop all my other classes and only sign up for acting classes,” he remembers. A few months later, Corbett had the lead role in “Hair” on campus, singing and dancing on stage as his father sat stunned in the audience. “He couldn’t believe his welder son was up there doing a shuffle.”

From 1986 to 1990, Corbett was hired for 50 national commercials. His first speaking role was as Karen Arnold’s boyfriend on Season 1 of The Wonder Years. He went on to roles as Chris Stephens in Northern Exposure, Aidan Shaw in Sex and the City and Ian Miller in My Big Fat Greek Wedding. He also started a country rock band that occasionally plays at WorkPlay in Birmingham. Corbett credits God’s providence with his transition from the steel factory to the stage. Corbett’s relationship with God today is heavily weighted in prayer. He prays for compassion. He prays for the lost, for other people’s souls. He prays to be less judgmental. “I try to be a good person and have forgiveness and have compassion and tolerance and just really try to listen,” he says. “Listening is big with me. That means letting people finish their sentence and not be in a rush to tell my story.”

The story of All Saints, however, is one he is quick to tell. After trading in his corporate sales career to become a pastor, Michael Spurlock had one assignment from his superiors: close the quaint country church in Smyrna, Tenn. for good, sell everything on the property and try to keep losses to a minimum. However, a group of Burmese refugees approached him for help, and Spurlock decided to sideline the Bishop’s instructions and turn the property into a working farm to pay the church’s bills and feed its newest people. Contemplating what it means to obey God’s voice when success isn’t guaranteed, the film is more of a “contemporary drama” than an argument for the Christian faith, says Rich Peluso of Affirm Films. It’s about people of faith living out ordinary circumstances in extraordinary ways.

If there’s any intentional message for All Saints viewers, Corbett says, it’s a simple directive to help others. “A church’s responsibility might be to care for the poor, but the church is also in business sometimes, and if the church is losing money they have to shut their doors. That’s just the way it goes. But we are human beings, and we don’t have to shut our doors.” Comparing Spurlock to the Bethlehem innkeeper the night Jesus was born, he continues: “When the Karen (pronounced kuh-REN) [refugees] showed up at Michael’s door, it would have been so easy for him to say I care about you and I love you and I’m sorry, but the inn is closed. The guy who ran the inn when Joseph and Mary showed up, who knows maybe [he] was a nice guy, maybe he did have a full house. Michael could have done the same thing and he didn’t.”

As revealed in the film, Spurlock’s vision was not without serious complications. 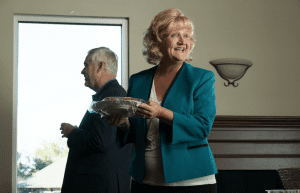 Weather, machinery and manpower problems all threaten to ruin his plan to save his church and give hope to the area’s refugees. But it’s the realization that a community can come together to help others that matters most. Corbett’s favorite line from the film is when Spurlock tells his son, Atticus, that he will just have to pray for God to help the Karen. “Atticus says, ‘but aren’t you God’s help?’ I like that because he’s so right. Yeah, I am God’s help,” Corbett says. “That line, every time I read it, it just sort of made me smile.”