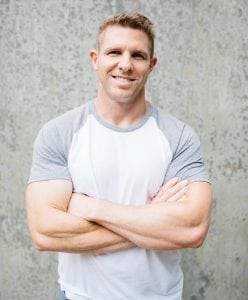 There was a time when fitness was an obsession for five-time American Ninja Warrior competitor Eddy Stewart. A Hueytown firefighter, personal trainer and bodybuilder, his family was often at the mercy of his detailed meal and workout schedule. Shifting his focus to ninja athletics, however, initiated healing in both his relationships and his Christian faith. A Top 30 finisher on NBC’s American Ninja Warrior in Seasons 7-10, 35-year-old Stewart reflects on the hop off the Cannonball Drop that eliminated him from the Miami City Finals in July and says ninja training represents resilience when life gets hard.

PRIORITIES. Stewart grew up an only child on a dead-end street in Bessemer. He passed his time climbing trees, making bicycle ramps to jump ditches and charging elderly neighbors $1 to pick up sticks out of their yards. He participated in Little League baseball, and later high school football, wrestling and tennis. He attended Brooklane Baptist Academy for grades 5-10, then finished at McAdory High School. He remembers his parents as godly influences who made prayer, family dinners and church a priority. He says one of his strongest childhood memories is the day his father refused to let him quit football the summer before his senior year. “That established a mentality of if I’m going to do something, I’m going to give it everything I’ve got,” he says. “That was one of those pivotal moments of being mentally tough and sticking with something even though it gets hard.”

Stewart studied criminal justice at the University of Alabama at Birmingham (UAB), spending the last six months of his senior year interning with the U.S. Marshals Service. He turned down a job offer with the Jefferson County Sheriff’s Department after suspecting God might have something else planned for his future. In 2007, he began serving as a firefighter and paramedic in Hueytown, prioritizing fitness in his free time. He trained for bodybuilding competitions and also worked part time as a personal trainer. By 2012, however, the pressure his fitness aspirations put on his family finally came to a head. His wife, Natalie, and two sons Henry and Charlie, needed his time and attention. “We’d go to the beach, and I might be able to go down to the [sand] for an hour and a half, then I’d need to come back up to the room because I had to eat my meal. Or if we were going out to dinner, I had to [tell my family] no, we can’t go eat at 4:30—we had to eat at 6:00. It became all about me.” Stewart admits his faith suffered as well. After placing third for Mr. Alabama at the National Physique Committee (NPC) Alabama State Championship, he left bodybuilding and personal training to spend more time at home. “My priorities got back in order. I saw what I became—I became a very selfish person, and the Lord kind of opened my eyes to that, and it really hurt my family. What’s neat was that as the Lord was healing my marriage, healing my family, even healing my relationship with my friends, he was doing a good work restoring my heart.”

MISSIONS. A trip to the Philippines in 2013 confirmed God’s blessing of a new sense of unity in Stewart’s family. A mudslide had destroyed a church in the mountains of Purok Abaca in the Southern Negros Islands. The church was so remote it could only be accessed via a 45-minute bus ride, a 20-minute motorcycle ride, and a two-and-a-half-hour hike. Stewart had visited the area before to contribute resources to rebuild, but this time, he would take Natalie. After an exhausting hike through jungles and across a flooded river to speak at churches, the couple was surprised by a day of rest on the beach. Friend and pastor Edgar Buhat had arranged a surprise renewal of wedding vows. What Buhat didn’t know was that Stewart had already been praying about the possibility he could re-wed Natalie while abroad. “After the ceremony, I asked Edgar why he did that, and he said he felt the Holy Spirit tell him to give us that gift when he saw us get off the plane,” Stewart remembers. “For Natalie and I, we knew that the Lord was reconfirming our commitment to each other and we realized just how good the Lord had been to us, seeing us through that difficult time.” 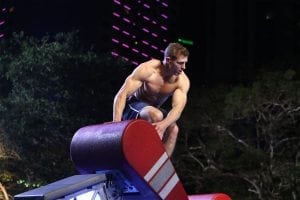 COMPETITION. American Ninja Warrioris a popular televised parkour-style obstacle course competition that includes running across angled discs, swinging between platforms, using outward pressure to move between two plexiglass walls, and scaling a 14-foot six-inch warped wall. Stewart had been watching the show, and its Japanese counterpart Sasuke, for years when Natalie suggested he apply to compete in 2015. Since then, he has become a fan favorite most recently known for his “left, right, double, double” pec flex. He made it to the Las Vegas Finals in 2015 and has finished the Qualifying Round three seasons since then. He also travels nationally to compete in events hosted by the Ultimate Ninja Athlete Association and the National Ninja League. With children’s activities and competitions included, it has become a hobby that belongs not only to him but also to his entire family. “Now it’s not all about Eddy; now it’s a family thing. I go compete, but they are there supporting me, they are involved.”

Stewart also speaks to his sons—and to the Birmingham area community—about the metaphors ninja athletics offers to perseverance, patience, faith and hard work. “In other sports you are competing against other people. This is a sport where the whole community cheers on everybody because you’re competing against the course. You’re all trying to finish an obstacle. You’re all trying to complete this series of tests,” he says. “You can kind of relate that in life. There are going to be obstacles in life, you’re going to face tribulations and hard times, and sometimes you’re going to fail… Just because you mess up, just because you fall, doesn’t mean you’re going to stay down. You get back up and you try again, and that’s something I am able to pass on to my kids.

An unexpected step off the course on obstacle two eliminated Stewart from this year’s American Ninja Warrior Miami City Finals. While the episode was taped in April, Stewart admits that watching it air on NBC in July exposed him to another round of disappointment. Stewart’s son Henry, age 10, was perhaps more upset than anyone. Stewart simply hugged him and said that next year, they’ll try again. “It’s important to me that I represent Christ, in successes and failures. And having two boys watching my every move, my primary goal is to always point them towards Him,” he says. “I’m extremely thankful the Lord has even given me the opportunity of a lifetime to compete at this level… Now it’s time to put down the doughnuts and get ready for Season 11.”