From SEC football to the Courtroom: Blessed to be a Blessing

Alabama Law School grad and former Vanderbilt football standout Joel Caldwell waited in the lobby of the law firm, knowing that the interview with senior shareholders could be a game changer. He did what he always does when anxious, he turned to the Word of God, swiping open the Word Alert app on in his i-phone. The message of the day hit home- it was Zephaniah 3:20, which reads, “At that time I will gather you; at that time I will bring you home, I will give you honor and praise among all the peoples of the earth when I restore your fortunes before your very eyes, says the Lord.”  His anxieties eased almost immediately. “It was the confirmation I needed that I was in the right place, with the right people. God was showing me the way,” says Joel who confidently accepted a job offer that day, becoming an associate attorney with Cory Watson Attorneys.

Joel identifies himself first as a Christian, then as a son, brother and lawyer. He credits his parents and the Christ -centered guidance they provided with helping him and his brother achieve success on the football field and in the classroom. Joel and his brother both played football for Hoover High School, and won scholarships to Vanderbilt University where Joel played Defensive Back and served as a leader in the Fellowship of Christian Athletes. Joel’s brother became a physician while Joel pursued law. 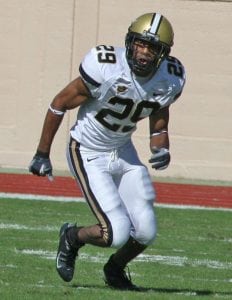 Before attending law school, Joel worked as a computer tutor at Children’s Village, a home for children who have been separated from their parents. “While volunteering there, I saw first-hand the great need for compassionate and individualized children’s care, especially for those in the foster system,” Caldwell said. “I was also inspired by this verse from James 1:27: ‘Religion that is pure and undefiled before God the Father is this: to visit orphans and widows in their affliction, and to keep oneself unstained from the world.’” Today, Joel serves on the Children’s Village junior board in addition to putting in volunteer hours with the kids.  At the office, Joel says he asks God for wisdom and guidance in his work with his clients and he keeps his Word Alert app at the ready. His advice for students who will be tackling new adventures this fall? Walk in love and be blessed to be a blessing to others.