FREEDOM FOUND at The Lovelady Center 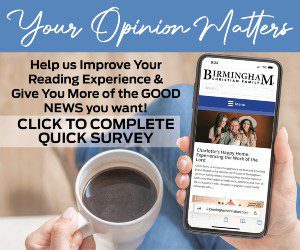 Brenda Bush was at her lowest when she arrived at The Lovelady Center (TLC). Struggling with drug addictions for most of her life, her children were eventually taken from her. She later reconnected with her daughter while still using drugs. “Never did she use or anything like that, but never did I try to correct myself,” Bush says. Sadly, just a few months after giving birth to Bush’s grandchild, her daughter became very sick and passed away. “I watched her take her last breath,” Bush remembers, adding, “Immediately, I spiraled all the way down. I was already out of control, but I completely did not care after that.”

Having experienced such tragic loss, Bush found herself at TLC looking for something- Jesus. “I asked Him [Jesus] in my room… ‘Why would you take my child?’ He said to me as clear as I’m talking to you now, ‘I gave My Son.’” Bush says that at that moment, after only being at TLC for a few weeks, something came over her. She experienced chills and began to believe that God put her daughter- with her beautiful spirit- on earth to straighten her up. “When I grasped that concept, everything seemed right. Everything seemed possible.”

Bush went through and graduated from the TLC program and found Jesus. She prayed for God to give her joy back and He answered in more ways than one. She has a great job in the Birmingham area that she loves. She even has custody of her nephew. “I lost my kids. So, to take on another child was never a thought I thought God would trust me with again,” Bush says. Having this opportunity reminds her of how good and big God truly is. “Not only did He forgive me… He gave me the opportunity to save someone’s kid that I used with.” Bush is living a new life of freedom rooted in Christ. As she reflects over her tumultuous journey to get where she is now, she says, “I’m in awe about how amazing God is and how He would save someone who was so broken.”

Founded in 2005, TLC is a faith-based drug addiction recovery treatment and prison reentry center in Birmingham. To learn more about TLC and how you can get involved, visit www.loveladycenter.org.