Avoiding the Summer Slide: Why Summer Learning is Critical

The brain doesn’t have an off switch. Kids are always learning—even while sleeping, which is when the brain processes and stores the information that was learned throughout the day. That’s why, cognitively speaking, it doesn’t make sense for kids to take a complete break from learning over the summer.

The idea of summer learning is not a new concept. Since the 1970s, researchers at John Hopkins University have been studying the fact that students’ learning skills regress up to 30% over the summer. “Summer learning becomes more important to students with every grade,” says 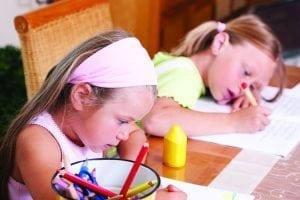 Denise Askelson of GradePower Learning. “Higher education is becoming increasingly competitive—students don’t have time to waste in the quest for better grades and summer is the best time to make improvements.” And yet, every summer, students who don’t engage in some form of learning lose academic momentum and neural connections that they had developed over the school year. By not maintaining an academic routine that stimulates cognitive functioning, students lose their learning momentum.

For those whose school year ended worse than it began, summer learning is especially critical. According to the research, students who do not engage in academic activities over the summer break are statistically and consistently more likely to start the new school year behind. They are also more likely to perform more poorly on standardized testing, even on tests that they may have already taken. These are the facts:

According to Askelson, the solution to preventing summer learning loss is as simple as engaging in some form of academically challenging activity for a few hours a week. While there are plenty of at-home activities that can help children continue to learn, the best way to ensure that grades don’t drop over the summer is to take an academic class that maintains learning momentum. “Students don’t have to give up their summer,” says Askelson. “It’s been proven that as little as two to three hours a week is all that kids need to avoid summer learning losses.” For more information about summer learning or any of the programs at GradePower Learning in Hoover, Hwy. 280, or Pelham, call 205-980-5745. †