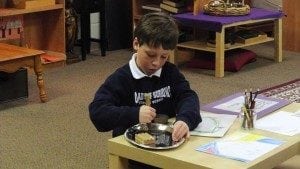 If you had one desire for your child what would it be? Maybe to recognize the voice of the Good Shepherd through His words in the Holy Bible? Or know that their baptism calls them to follow Jesus and to spread His light throughout the world? If you answered yes to any of these questions, then you may understand the unique purpose of a specialized program that Homewood’s Our Lady of Sorrows Catholic School (OLS) offers as enrichment to its regular religion curriculum. OLS is the only Catholic school in Alabama to offer all three levels of the program in its entirety. This method of religious formation, developed in Rome by a Catholic Hebrew scholar and Montessori educator, was introduced to Birmingham by Stephanie Deithelm at All Saints Episcopal Church and has grown to include several denominations throughout the area. It is called the Catechesis of the Good Shepherd (CGS)- better known as Atrium.

“The idea of the Atrium is to foster the relationship with God that each child already possesses,” said Maris Wimberly, OLS Director of CGS. “The program’s National Association declares its purpose as ‘to assist the involvement of children and adults in a common religious experience, in which the religious values of childhood, primarily those values of contemplation and enjoyment of God, are predominant.’”

The knowledge from one year builds each consecutive year, and the students revisit religious works several times throughout the three years in each level. “Approaching the content of the Catechesis of the Good Shepherd from the Atrium level emphasizes the freedom the children have to work with lessons, and through the materials, to hear God speak to them personally,” explains Wimberly. To learn more about the program and others offered by OLS call (205) 879-3237 or visit the school’s Open House on Sunday, January 29, 2017, from 2:00-4:00 p.m.