As Pinson Valley High School players made their way into the final seconds of their football game against Wetumpka to win the Class 6A High School Football title last year, a sign in the stands read “Fueled by PB&J”. This referred to a special ministry started by Clearbranch United Methodist Church (UMC) in Trussville. As the season began, church leadership met with some of the coaches from Pinson Valley. “Our kids are hungry” they were told. The players weren’t just hungry for a winning season, but also hungry for nutrition. The church committed to providing peanut butter and jelly sandwiches and chocolate milk for the football team each day for the season.

As the season went on, the relationship grew between the school and the church. Clearbranch began providing more snack options, opening the door for other conversations between members and players. Before long, Bibles were given to the football team. More student athletes began to request Bibles for themselves and the ministry opened up to include all players of high school sports at the school. 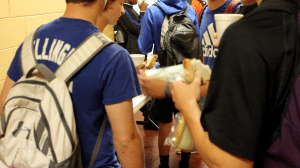 As the wins began to stack up during the football season, God was working in the lives of the players. Kids were reading their Bibles on the team buses on the way to games. New Bible study groups began to take root. “It’s happening! It’s the fire of Christ and its spreading!” said one young player. After the games were finished and the football championship won, Clearbranch continued to provide sandwiches for the rest of the school year and now considers it an ongoing mission with various small groups volunteering to take turns making sandwiches. Over 22,000 sandwiches have been made in the past year by Clearbranch members and the number will continue to climb as school starts and football season kicks off again! God is doing some amazing things through this ministry, and it all started with a peanut butter and jelly sandwich.