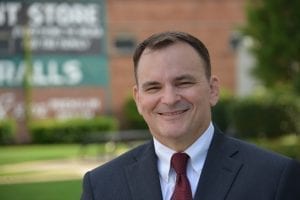 Alan Miller is a husband to Meredith, father to John Ryan, Tulane University and University of Alabama School of Law graduate, and a United States Marine Corps veteran. With these valuable experiences and relationships, Miller is now running for Shelby County District Judge in the March 3, 2020 primary.

After enlisting in the Marine Corps upon high school graduation, Miller received a Naval Reserve Officer Training Corps scholarship to Tulane University. “I was commissioned as a 2nd Lieutenant upon graduation in 1995.” After leaving active duty in 1999, Miller married his wife, Meredith. Then in August of 2000, he started law school at the University of Alabama School of Law and began externing at the District Attorney’s Office in Shelby County. Upon graduation, he accepted a position in the DA’s office while maintaining his commitment to serve our country in the military. “After the events of September 11, 2001, I sought out a prior service recruiter and joined the Marine Corps Reserve as an artillery officer awaiting deployment if necessary.” Miller was eventually deployed in 2004 and 2008. He returned to the District Attorney’s office after both deployments and was promoted to Chief Assistant.

When asked why he is running for office, Miller responded, “The caseload in Shelby County is very high for the number of judges we have available. We’ve got to have judges who are willing and able to serve in multiple roles. I have the experience necessary to preside over jury trials as a specially appointed Circuit Judge.” Miller has several mentors that inspired him to run for election including Judge Bill Bostick. He adds, “My grandfather, John Miller, and my aunt and uncle, Martha and Johnny Thompson, taught me the importance of stepping up to help people when you can. I’ve tried to follow that example.”

Miller accepted Christ as his Savior when he was 27 years old. At the time, he was leaving active duty and felt a deep emptiness inside. “My faith has taught me the value of striving to live a life that is surrendered to Christ. When I do this successfully, my decisions and actions are guided by conscience; without regard to outside pressures or improper concerns,” explains Miller, an active member at Liberty Baptist Church in Chelsea, Ala. Learn more about him here.