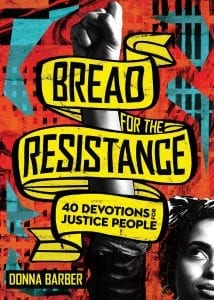 Sometimes we slay the giants that defy the rule of God. We cast our stones and the monstrosities which defy Christ and his kingdom buckle and fall. We fight a good fight, we keep the faith, and evil crashes in defeat. But what happens when we sling our stones and Goliath doesn’t fall? What if we find ourselves being chased by giants across the valleys of institutional injustice and idolatrous ideologies? What if we simply grow weary in well-doing?

Donna Barber’s new book, Bread for the Resistance -40 Devotions for Justice People (Intervarsity Press), is written for those who are weary from the battle. Whether you’re a minister, public servant or simply a disciple of Jesus who takes the teachings of Jesus seriously, Bread for the Resistance will refresh your spirit and strengthen your resolve to be faithful to your call. When results seem elusive and wickedness in high places fails to fall, Barber’s words of encouragement remind us that God has not called us to win battles. He has called us to be faithful. Keep writing, speaking, and praying. Keep speaking prophetically to the powerful. Keep preaching the good news of the Kingdom. Bread for the Resistance is a call to stand fast if you can’t walk, run or soar. Don’t give up. Jesus is still the King of kings and the Lord of lords. You may lose some battles, but He will win the war. If you go down, go down preaching.

Several years ago, a politician who believed that the Christian faith compels us to engage in matters of social justice lost an election. The politician, known for carrying a New Testament at all times, ended the last speech of his political life with a quote from the Apostle Paul. “Let us not grow weary in doing good, for in due season we shall reap if we do not lose heart.” It was an exemplary moment for all who work and minister in God’s kingdom. Be faithful in victory, be faithful in defeat. Don’t lose heart, don’t stop doing good, and never lose hope. In the end, we win.