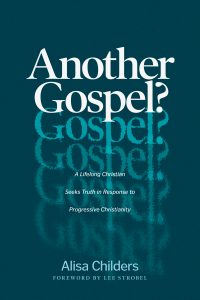 We live in a fractious and contentious time, and families are not immune from the political, social, and theological tensions which have swept over our society. One of the many divisions is a consequence of younger Christians moving from conservative theology to liberal or progressive theology. When families are divided about matters of faith, the emotional and relational toll can be consuming.

This month I’m enthusiastically endorsing a book that I don’t always agree with. The reason I’m encouraging others to read Another Gospel: A Lifelong Christian Seeks Truth in Response to Progressive Christianity by Alisa Childers (Tyndale) is quite simple – it is a true story that can inform both theologically conservative and theologically progressive Christians to better understand not only the nature of the debate between their two worlds but also the human dimension of the debate as well. Doctrines such as the authority of scripture, the nature of the atonement and the existence of an eternal afterlife are not simply academic. What one believes about such matters makes a difference in how one lives, dreams, prays, and engages the world.

Another Gospel is the fascinating story of a conservative woman’s encounter with progressive theology. Childers attended a progressive church for several months before deciding to return to her conservative expression of faith. The detour, although short-lived, rocked her world. It forced her to face questions she had never considered and to seek answers that were both intellectually consistent and biblically sound. It exposed weaknesses in not only her personal belief system, but also in the theological ethos in which she was raised.

Childers’ story is a cautionary biography that reveals the pitfalls and benefits of both sides of the debate between conservative and progressive Christians. There are aspects of both perspectives which should be applauded and embraced. There are aspects of both sides that should be viewed with concern. Her journey within both worlds changed her life. Interestingly, she did what very few conservatives do after being introduced to progressive theology – she came back to conservatism – albeit somewhat chastened.

In my network of friends and family, some are theologically conservative, and some are theologically progressive. Perhaps your family is the same. While their views are quite different on important matters of faith, both sides love God and take their faith seriously. I believe that both are represented within the body of Christ. May Christ our Shepherd bless conservative and progressive Christians to advance His kingdom, and may He start by bringing peace among His flock.