A Day in the Life at Sav-a-Life Vestavia

The couple from Georgia arrived early and stood on the porch of the Pregnancy Test Center in Vestavia waiting for the doors to open. The young lady had been through multiple miscarriages, and they were anxious to confirm she was again pregnant and to learn how to ensure the baby would be safe. The receptionist welcomed them and the two were assigned to meet with client advocates Bob and Denise, a pre-step to the medical procedure. 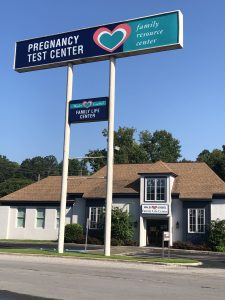 The next client was a confused teenager, Marie, who arrived for a pregnancy test set up by her mother. In her meeting with advocate Kay, she was quickly in tears. Kay learned that the father did not have the maturity for marriage to be a consideration, and Marie was under pressure from her mother to have an abortion. Marie was deeply concerned about ending the young life within her but felt her mother’s weight of judgment.

In the advocates’ conference room, volunteer Barbara was on the phone to follow-up with an unwed mother, Wanda, who had been to the center the previous week. A sonogram revealed she was pregnant with twins. Wanda had expressed anxiety about the pregnancy because she was alone with her children: her man was not involved. Even so, she indicated the intent to carry the two babies to term. But when Wanda answered the call, Barbara learned the expectant mother was at that moment traveling to another city to have an abortion.

Meanwhile, Bob and Denise presented information to the Georgia couple about parenting, the benefits of marriage, and the claims of Jesus Christ. Both the young lady and the young man prayed and asked Jesus into their hearts. Nurse Erin then received them into the consulting area for the pregnancy test, which was positive. Erin set up a pre-natal care appointment and provided references to doctors who could guide the couple to a safe delivery.

In the second consultation room, Marie accepted information from Kay and nurse Ruth about the risks and ramifications of abortion to take to her mother. In a later follow-up call, Kay learned her mother had agreed to support Marie’s decision even if it was not abortion. Marie courageously decided to carry the child to term and then decide on either adoption or to parent the child herself with the help of its grandmother.

Back in the counselors’ room, the drama of the real-time effort to save two babies continued.  With the assistance of other advocates, Barbara convinced Wanda to exit the interstate highway, turn around, and return home to reconsider keeping the babies. With the commitment of help from the client advocates, Wanda chose life.

In a typical day, the client advocates and medical staff of the Pregnancy Test Center help their clients deal with a wide range of life defining issues. Their experiences include talking with a handsome college student, who came in to be tested for a sexually transmitted disease, about the dangers of promiscuity and his need to respect women. A male advocate helping a stressed-out professional gain confidence that he could raise the child of his pregnant girlfriend. On another day, advocates explain the love of Jesus to a transgender person.

Operating through the Pregnancy Test Center, Sav-a-Life provides a safe, friendly, and non-judgmental environment where clients can discuss their fears and concerns and receive vital information regarding their health, pregnancy, and options. Through these services, hurting individuals are shown a path to wholesome, complete and purposeful lives. As the Lord says in Ezekiel 34:16 ESV, “I will seek the lost, and I will bring back the strayed, and I will bind up the injured, and I will strengthen the weak.” Read here about specific ways you can volunteer at Sav-a-Life. Also learn more at www.savalife.org.

*Details and names have been changed to protect anonymity.