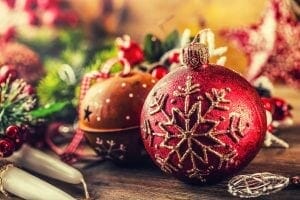 Christmas traditions have united the followers of Christ around the world for centuries. They have brought families, friends, communities together every year. Did your family have traditions they held to every year for Christmas? Growing up, I was ecstatic to help light the candles on the Advent wreath and decorate the Christmas tree. Now with my own family, my wife and I have begun to craft traditions our family will follow for years. We have pulled from both of our individual family traditions to make something new. I want to delve into the history, myths, and legends around some of the most popular Christmas traditions. Grab your family and embark on this quick quest with me. For as Hilaire Belloc once said, “To comprehend the history of a thing is to unlock the mysteries of its present, and more, to disclose the profundities of its future.” 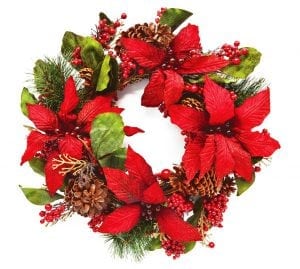 Christmas Tree, Advent Wreath & Yule Log. St. Boniface of Crediton was a British-born bishop and missionary born in the latter half of the 7th century A.D. At the age of thirty, he left the comfort of the life he lived to become one of the greatest missionaries to the Teutonic tribes who inhabited modern day Germany. Arriving in Hesse, Boniface announced he would destroy the barbarian’s gods. He strode straight up to the sacred Oak of Thor, a tree located in a hallowed grove, which no man could cut down. Legend states after four ax blows the tree shattered into four pieces, revealing a center that was rotten. The growing crowd of onlookers expected their gods to destroy Boniface immediately, but they soon came to see their gods were powerless to defend their own shrines. Boniface used this opportunity to spread the Gospel of the One who died on a tree centuries before.

Three nights later, a young boy, who heard of Boniface’s audacity, ran from a neighboring village to tell the saint his own sister was to be the vestal sacrifice of the gods that night. Boniface and the boy ran back to the village and came to the sacrificial altar just as the druid was bringing down his blade. With only a small wooden cross in his hands, St. Boniface jumped forward, catching the blade with the crucifix and saving the girl’s life. Speaking quickly, Boniface proclaimed the ultimate sacrifice had already been made, rendering all others needless. The crowd listened intently as he explained there was no need for further sacrifice because of Christ. Boniface began to cut fir branches off of nearby trees and told the families to take them home in remembrance of the complete work of Christ so many centuries before. He told them the sacred grove could be cut into logs for their home to remember the final sacrifice of Jesus. Boniface ultimately reformed the entire Frankish church, eventually giving up his life while sharing the Gospel. From the fir branches cut on that cold winter night spring the traditions of the Christmas tree, advent wreath, and Yule log.

When you hang a wreath on your door or stand a Christmas tree in your house, let them be reminders of the work of Christ on the cross. Honor that sacrifice as well as the life of St. Boniface of Crediton by continuing these traditions. Also consider including the tradition of the Advent wreath. The season of Advent is carried over the four Sundays preceding Christmas. The wreath holds four candles which are lit one by one on each Sunday. The candles remind us to prepare our hearts for celebration of Christmas. The wreath is carried down from the bold actions of Boniface.

Mistletoe. In the forests of Europe, mistletoe blooms when all else has succumbed to the harshness of winter. So over time, the small berries became a symbol of hope and life to men of the middle ages. Over the centuries, sprigs were brought into the homes of Christians and hung on doors as a reminder of the Hope of Christ in this dark world. Lovers would kiss under the arrangement and pick one berry as a sign of their love and covenant toward one another.

Holly & Ivy. According to the book Christmas Spirit by George Grant, “Throughout the Celtic lands of Brittany, Cornwall, Wales,
Scotland, and Ireland, holly and ivy were symbols of victory won. Holly, representing masculine triumph, and ivy, representing feminine triumph, were often woven together as a sign that men and women need one another. Homes were decorated during Advent with both—often woven together—as a picture of a healthy family under God’s gracious providential hand.” Holly and ivy are symbols of God at work through man and woman. We are all vessels of His glory during this season. 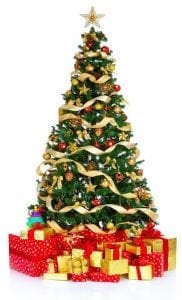 Christmas Gifts. To modern children, who is the greatest gift giver? Santa Claus. Jolly Ole Saint Nick actually finds his roots in a fourth century bishop and martyr, St. Nicholas of Myra. We do not know much about the early life of St. Nicholas, but we do know he most likely came from a wealthy family in the Roman province of Lycia. His fame grew quickly due to several climactic events: he was imprisoned for a strong profession of faith made during the persecution of the Roman Emperor Diocletian, he reportedly slapped the heretic Arias at the first counsel of Nicea, and he saved three young women from being given to prostitution by their father. According to legend in Nicholas’ hometown of Patara, a prominent family lost their fortune. The father had three young daughters ready to marry, but he could no longer pay a dowry. He was ready to give them to prostitution, but something miraculous happened. For three nights, Nicholas walked by the man’s house and threw a bag of gold coins in through the window. Each bag became a dowry for the three daughters, allowing them to be married the very next day. Nicholas’ generous and good gifts are one of the origins of our modern-day gift giving. According to George Grant, “Through the centuries, the traditions associated with Nicholas have proven to be an inducement to steer clear of the twin pitfalls and pratfalls of materialism and aestheticism. In the midst of the whirling change of the modern world, we need those traditions more than ever. The efficacy of tradition to offer stability, continuity, and guidance is indubitable. Connections to the past are the only sure leads to the future.”

In a day of the new-is-better mentality, we must remember that our Christmas traditions are designed to turn our eyes back to the greatest gift ever given: Christ Jesus. While celebrating in these ways, we are remembering that our God descended into this very world and was born in a stable among the animals in order to save us. If we are to have an impact on our culture, we must first learn where we have come from so that we can apply these lessons to our present and ultimately change the future. A babe in a manger, two thousand years ago was born to save you. He was born so that you might share His story with a desperate and lonely world. He was born so that all of creation might be redeemed. Continue the redemption by telling one story at a time.

O Jesus, shine around us

With radiance of Thy grace;

O Jesus, turn upon us

The brightness of Thy face.

We need no star to guide us

As on our way we press,

If Thou Thy light vouchsafest

Thom is a free-lance essayist, poet and a lover of old books. He teaches Latin, Literature, and Aesthetics at Franklin Classical School, where he also serves as Athletic Dir. He, his wife, Jenna, and their daughter Mary Lee live in Franklin, Tenn.