In the 2021 Olympics, Allyson Felix finished with a bronze medal in the women’s 400-meter! This accomplishment marks 10 track and field Olympic medals for Felix. She now holds the title for the most decorated female Olympic track and field athlete! BCF caught up with Felix before she competed in the Olympic Games at Rio and she shared with us how she gives God all the credit for the gift of speed He has given her.

Felix has won more medals than any other track and field athlete in the last three Olympic Games. She has four golds and two silvers, plus six wins in the U.S. Track and Field Outdoor Championships. Her 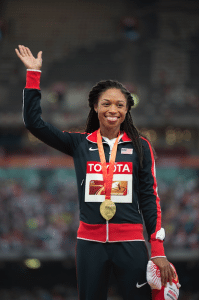 best event is the 200-meter sprint. Humble and soft-spoken, the runner is considered a favorite for the summer Olympic Games in Rio de Janerio, Brazil, this month and says her speed is a gift from God

While athletic in her youth—she always liked basketball and gymnastics—Felix did not start running until her freshman year at Los Angeles Baptist High School in California. “I was always super competitive, so the idea of getting to line up and right away know who’s the fastest was just super cool to me,” she says. “It hasn’t really stopped since then.”

She made history in Mexico City in 2003 when she ran the 200-meter in 22.11 seconds, the fastest ever by a woman under age 20. That year Track and Field News named her the female “High School Athlete of the Year.”

Felix landed a professional contract with Adidas and attended the University of Southern California. In 2007, she became the second woman in history to win three gold medals at a World Championship. She won her first Olympic gold medal as a part of the 4×400 meter relay in the 2008 Games in Beijing. Coming in second in the 200-meter to Jamaica’s Veronica Campbell-Brown, however, left her crying in the tunnel beneath the stadium. 22-year-old Felix was considered the favorite, and she didn’t anticipate second place. She maintains today that was one of her most difficult losses. “There were such high expectations, and when things didn’t work out the way I had hoped they would, I had to learn how to deal with that and learn how to see if this was still something I wanted to go after—if it was still important to me,” she says. “Looking back, some of my greatest lessons learned were in that moment. It really refueled me for the next four years to keep competing hard and keep going to reach my ultimate goal.” In 2012, Felix finally clinched gold in the 200-meter as well as the 4×100-meter relay and 4×400-meter relay, making her the first woman to win three gold medals at an Olympic Games since 1988.

Prepping for the 2016 Olympic Games in Rio this month, Felix says her average day includes five hours of training—three on the track and two in the gym. Her afternoons include chiropractic massage work, and her meals are interspersed throughout the day with a large dinner. Sundays are for rest alone. When she has time to herself, Felix likes to go to the beach with friends, go to the movies, go bowling or simply stay at home.

Off the track, Felix is also a big fan of fashion and attended Fashion Week in London and New York in 2012. “I love Tom Ford and anything that’s unique or different, but I also like classic pieces as well,” she says. “I’m a laid back girl. On a typical basis I am wearing jeans and a t-shirt.” 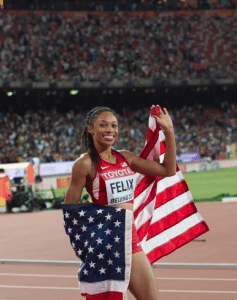 When it comes to matters of faith, Felix is well known for her Christian upbringing. As a child, her father was a pastor, and she attended Christian schools. Both parents have been influential in her continued growth in the faith. “My mom—whenever I would travel or go anywhere or be on my own—would tell me ‘remember who you are.’ For me that really just meant remember the things that you believe, remember your faith, and carry those things along because people are always watching. They are always looking at you, and that’s the best way to share your testimony.”

Felix’s father teaches New Testament Greek at the Master’s Seminary in Sun Valley, Calif., and has returned to a pastoring position where Felix attends worship. She finds it special to attend church with her family and see her father’s work firsthand.

Felix also has a close relationship with her brother, Wes, who was the USA Junior Champion in the 200-meters in 2002 and the Pac 10 champion in the 200-meters while running for USC in 2003 and 2004. Wes became her agent after health issues caused him to hang up his cleats for good, and he encouraged her after her unexpected silver standing in Beijing. He also carried her off the track when she injured her hamstring during the 200-meter final at the 2013 World Championship in Moscow.

Felix says watching Wes battle a liver virus and have to walk away from his dreams to support hers has been an inspiration. “I knew how passionate he was about the sport and that he hadn’t reached his potential. There was still so much left there,” she says. “Seeing him switch gears was inspiring to me…. It has been awesome to work together and be on this journey together. He sees me at all different moments and knows better than anyone what’s on my mind. He’s there to help pick things up when they are falling down and celebrate when they are going well.” Under Wes’ guidance, Felix secured a sponsorship with Nike. He handles all press and off-track responsibilities so she can focus on training. 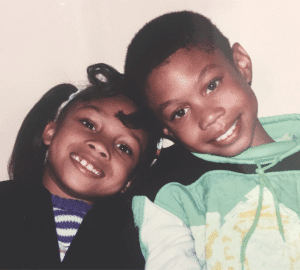 Felix is quick to call her speed a blessing from God and a talent that she can use to bring Him glory. “I feel like I have been blessed with this amazing gift…. And I am able to be on a platform, to show my lifestyle and show this gift that He has given me. It’s a really awesome opportunity.”

When she sees other athletes credit God for their talent—like the NBA’s Steph Curry, who led the Golden State Warriors to a record 73 wins in the last regular season—she is inspired to continue demonstrating her faith on and off the track. Curry is known for pointing a single index finger upward after making a jump shot, a subtle credit to God for his success. “Whenever I get to see an athlete in that moment, it’s completely inspiring,” she says.

Bobby Kersee—Felix’s coach and husband to retired track and field veteran Jackie Joyner-Kersee— calls Felix “the quiet storm” because she transitions so well from laid-back family girl to aggressive competitor. He has said he believes this will be Felix’s “signature year.” Her original goal for Rio was to win gold medals in both the 200- and 400-meter—something that hasn’t been done in 20 years. But an ankle injury that has plagued her since spring caused Felix to come up short in the 200-meter final qualifying race last month. So at the Games she will aim for a win in the 400-meter and any relays she is chosen to participate in. Trouble could come in the form of that bothersome ankle, but there is no doubt Felix will rely heavily on her God-given gift of speed to go for the gold.