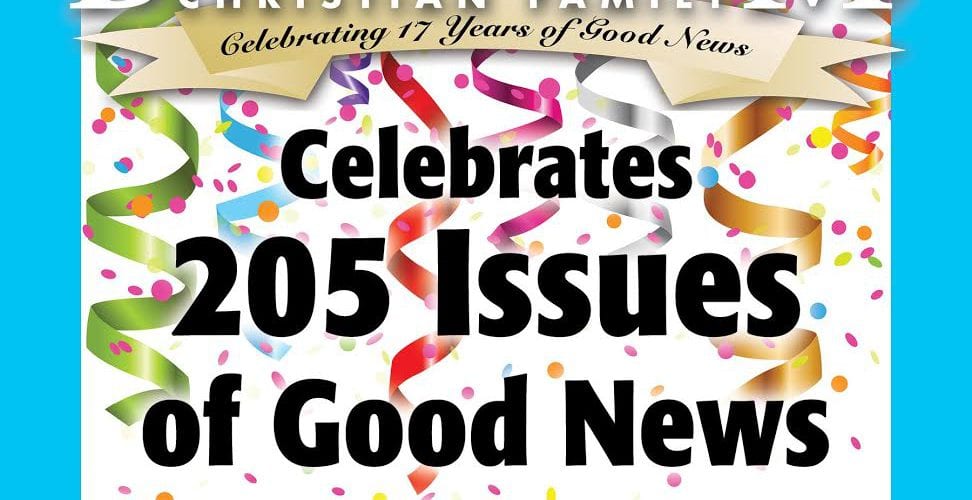 Birmingham Christian Family magazine is entering its 18th year of sharing Good News in our community.  Here’s a look at the way some of our top cover stories are continuing to live their lives to God’s glory. We rejoice and thank God for allowing us to highlight His work and share it with you. 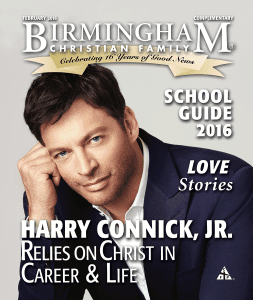 When actor and musician Harry Connick Jr. spoke to Birmingham Christian Family about the release of a new album (February 2016), he was candid about how the death of his mother to cancer when he was 13 years old—and the comfort his father found in Catholicism—deeply impacted his personal faith. He was prepping to judge the final season of “American Idol” then tape the first season of “Harry,” a syndicated daytime television show. It averaged 1.3 million viewers, received five Daytime Emmy Award nominations, and was renewed for a second season this fall. This year, Connick returned to the New Orleans Jazz Fest for the first time in 10 years and he sang the National Anthem at the 143rd Kentucky Derby. In a segment on HarryTV.com, he returns to Jesuit High School in New Orleans, walking through the drama department and the recess yard, reflecting on some of the same memories he shared with BCF. “I remember sitting in chemistry classes and physics classes thinking how are these guys around me getting A’s and B’s…. I don’t think my mind worked that way. Music was something that just definitely came easier to me,” he says. “They were always very accommodating to me… [the Jesuits] recognize the strengths in people and help to develop those things.”

To prep for the 2016 Olympic Trials, U.S. Track and Field sprinter Allyson Felix spent three hours on the track and two hours in the gym 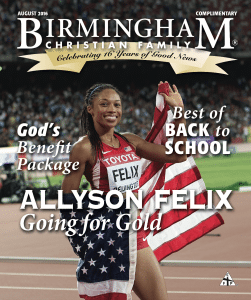 each day, Monday through Saturday. Sundays were for rest alone. She told Birmingham Christian Family (August, 2016) that her speed was a blessing from God, and her goal for the Games in Rio de Janeiro was to become the first athlete in 20 years to win gold medals in both the 200- and 400-meter races. Plagued by an ankle injury, however, she missed her chance to qualify in the 200-m by .01 seconds. At the Games, a dramatic finish in the 400-m left her second to Shaunae Miller of the Bahamas. She also finished with gold medals in the 4×100-meter relay and the 4×400-meter relay, becoming the most accomplished American female in the history of track and field. In May 2017, Felix competed in the 100m in the Jamaica International Invitational and placed third. According to NBC Sports, she plans to train for the 2020 Olympic Games in Tokyo but recognizes that at 31 years old, competing less may be key to staying healthy. She will focus on the 200-meter alone, the race that brought her fame as a teen. If she succeeds, she could become the oldest U.S. Women’s Olympic medalist in an individual track and field event. 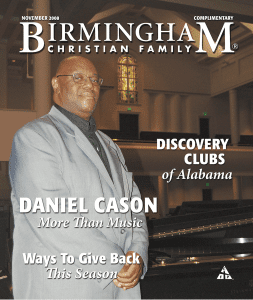 Daniel Cason’s musical faith journey began when at 8 years old he volunteered to be in a play at a neighborhood center in Cleveland, Ohio, and realized he had a musical gift that could only be from God. In November 2008, Cason shared with BCF readers that his Birmingham-based K.I.D.S. (Kids In Divine Service) Christian Music Center ministry on 7th Street North was meant to duplicate the benefits of the instruction he received in his youth. Through the tireless efforts of Daniel and his wife Gwen along with community support, the non-profit Center is celebrating 21 years of offering not only musical training but also after school study assistance, Bible classes, summer camp, and a feeding and clothing ministry.  WORLD magazine featured Cason on its cover last summer, recognizing him as the 2016 Southeast Region Hope Award Winner for “poverty-fighting programs that change lives.” In April 2017, the Women’s Committee of 100 for Birmingham recognized him for his humanitarian efforts and presented him with the Brother Bryan Prayer Point Award. This month, Daniel Cason Ministries will host its 21st year of summer music camp for inner city youth. The theme will be, “We Are Family.” “I want to focus on the unity of the family in our community. If kids need help with their homework or with domestic issues, your family is bigger than just your mom or your dad,” emphasizes Cason. “Your church can be your family. Your school, your community.” Five hundred children are expected to participate in the expanded two-week camp. Some of them are likely to hear about Jesus for the very first time and many will leave the camp with scholarships to help them pursue their educational dreams. You can support one child for two weeks of camp for $200, www.danielcason.org.

“You will never know the purpose of your life until you know the Creator of your life,” explained Alabama native and Clemson Head Football 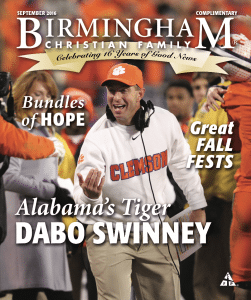 Coach Dabo Swinney of the way adversity has grown his faith in Christ (BCF, Sept 2016). “His plan is always bigger and better than what my plan is, and He has taught me that time and time,” added Swinney who grew up in Pelham where his father, Ervil, owned an appliance repair shop in Pelham and struggled significantly with alcohol abuse. Homeless for a time, his mother lived with him in his Tuscaloosa apartment while he played wide receiver for the University of Alabama. Last month, the two-time Paul “Bear” Bryant Coach of the Year (2015, 2016) traveled with his Clemson Tigers to the White House where President Trump recognized them for winning the 2017 National Championship last January. This was Swinney’s second National Championship trip to the White House. He was also a player on the 1992 University of Alabama National Championship team. Off the field, Swinney and his wife Kathleen are passionate supporters of breast cancer research, as both have lost family members to the disease. This month at Clemson University, the Dabo Swinney 2017 Ladies Clinic will give women the opportunity for football instruction from coaching staff, a silent auction and live auction, and a look at the new campus Football Operations Facility. A portion of each registration fee will be matched by Dabo’s All In Team Foundation, with the proceeds going toward breast cancer prevention and research. Last year’s event raised more than $105,000. 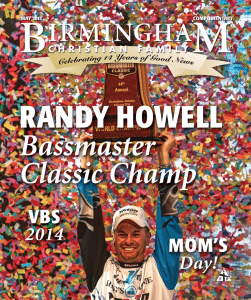 Two Alabama fisherman have shared their stories of faith and perseverance in their sport with BCF readers as they reflected on Bassmaster Classic wins. Springville’s Randy Howell (BCF, May 2014) said it was a sudden nudge from the Holy Spirit to change his plans for his final day of Classic fishing that led him to an emotional rise from 11th place to first. To date, he has participated in 267 tournaments with four first place finishes, including the 2016 Bass Pro Shops Northern Open #2. Since his feature, Randy and his wife Robin built a new home on Lake Guntersville. He frequently blogs about how faith remains central to his career: “The bottom line: I know I’m not in control; He is. After winning the Classic in 2014 that became very clear to me, and that experience has taught me not to worry. Whatever happens, happens for a reason, and it’s out of our control, period. The amount of stress that has been relieved in my life by not worrying is hard to explain, but I do know that I fish better, and I’m a better husband and father when I rely totally on Him.”

After 12 years of life on the road, three time Bassmaster Angler of the Year Aaron Martens bought a home in Leeds with his wife Lesley in 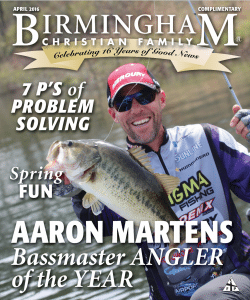 2001. He quickly found mentors and a church family that helped deepen his faith amidst the exhaustion and distance from home brought on by regular competition, he told BCF in April 2016. Since his interview, Martens has become the Major League Fishing record holder of the all-time, single-day heavy weight. His wife Lesley continues to lead a small group for The Summit Church in Trussville, and the couple’s children, Jordan and Spencer, are rising ninth and fourth graders at Briarwood Christian School.

As she prepared to pass on her crown at the 2017 Miss Alabama Pageant at Samford University last month, Miss Alabama Hayley Barber spoke about her passion for pediatric optometry and how the machines she donated to low vision patients in Alabama gave new opportunities for literacy and independence. Jessica Proctor, a Tuscaloosa native and a senior at the University of Alabama, won the competition and will represent our state in the 2018 Miss America Competition in September. Barber’s advice for her in the coming year: “Miss Alabama is what you make it—with the people that you meet, the places that you go. There are days that are tough when you’ve been standing in high heels for eight hours and you’re tired and it is really hot outside and you’re exhausted. But that same day you could have made an impact where you saw a young girl and she had enough confidence in you to tell you that she was being bullied at school, but you tell her that she is special in her own way. You have the opportunity to make a difference and focus on the extreme joys that come along with all of the people that you meet.” 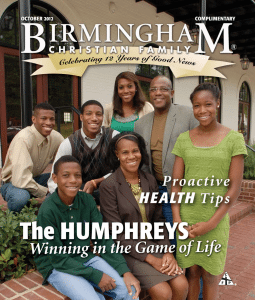 testimony in life’s misfortune. “A lot of times you have to be broken to be made,” wife Barbara told BCF in October 2012. The couple have five children who attended Hoover City Schools and excelled in athletics. Barbara still holds the UAB record in the 400-meter dash, and son Marlon won the 100-meter hurdles and 400-meter hurdles at the 2013 World Youth Track & Field championships. By his sophomore year at the University of Alabama, Marlon began focusing on football alone. He was signed to the Baltimore Ravens this May as a first-round cornerback.