Families have been bringing their children to the offices of Pediatrics East for 60 years. The love and support of the doctors, nurses and other staff members has had an impact on one family in particular. Kendall Griffith is the second of three generations of her family who have been patients of Pediatrics East. As a child, Griffith’s father was a patient of the original doctors at the first location of Pediatrics East and he wanted Kendall to have the same type of pediatric care. She became a patient of Phillip Harmon, M.D., who at the time, was the youngest doctor at the practice. When Griffith went off to college in Cullman, she would drive all the way back to Pediatrics East for appointments because she said it felt like home. She said Dr. Harmon and the staff treated her like family, and she credits them for the person she is today.

One influential staff member Griffith recalls is Miss Jackie, Dr. Harmon’s medical assistant. She was always there to care for and encourage Griffith as she grew up as a patient. When Miss Jackie retired after many years as a loyal employee, Griffith stepped into her shoes as the medical assistant to Dr. Harmon, the doctor who had been there through her childhood. She has worked there for three years, and her 5-year-old son is now the third-generation patient in their family line. “I love this place and so does everyone in my family,” Griffith said. “I started working here with the mindset that if I can change one child’s life how mine was changed by Pediatrics East, I will have done some real good.”

“Our staff is proud of the positive impact we have had on pediatric health care in this community,” Harmon said. “We are honored to be treating the children, grandchildren and great-grandchildren of former patients. We look forward to serving the families of Pediatrics East for many more generations to come.”

The practice was established in 1957 by Dr. Vincent Carnaggio to serve families in eastern Birmingham. Children’s of Alabama purchased the practice in 1996. Today, the practice operates two office locations- 520 Simmons Drive, Trussville and 6729 Deerfoot Parkway, Pinson. Pediatrics East received the highest Patient Centered Medical Home certification from the National Committee for Quality Assurance (NCQA) in 2013 and was recertified in 2016. † 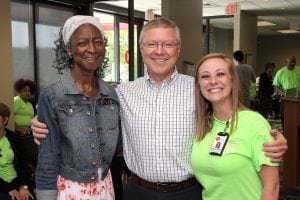