“Serving Aboard a Floating Airport at Sea”

Birmingham native and 2016 Hoover High School graduate Xavier Jones is serving our country aboard the aircraft carrier USS John C. Stennis, a floating airport at sea. Seaman Jones is a culinary specialist aboard the carrier. “Serving in the Navy gives me a lot of opportunities not only for myself, but for my family,” said Jones. “I get to be a role model for my family, especially my siblings.”

Petty Officer 2nd Class Nathan Rushhaven is a 2013 Chelsea High School graduate and provides key support as part of combat operations aboard USS Philippine Sea. A Navy fire controlman aboard the guided-missile cruiser, Rushhaven credits success in the Navy to many of the lessons learned in Chelsea. “I learned that having a good work ethic and pride in your work pays off in the end.” 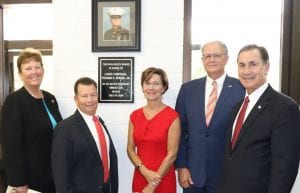 Congressman Gary Palmer along with officials from the United States Post Office recently dedicated the United States Post Office Meadowbrook Station as the “Lance Corporal Thomas E. Rivers Jr. Post Office Building.” Congressman Palmer’s bill, H.R. 4646, moved to designate the facility in Rivers honor and it was signed into law by President Donald Trump. Rivers, a resident of Hoover and graduate of Briarwood High School, was killed in enemy action on April 28, 2010, in Afghanistan. He is survived by his parents, Dr. Tom and Charon Rivers; sister, Rachel; and grandparents, Colonel (Ret.) and Mrs. Charles R. Doke.

Posted in Faith at Work