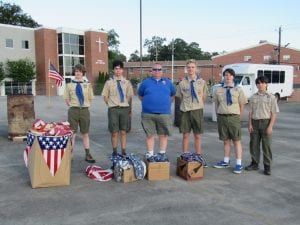 More than 115 frayed and faded United States flags and one United States Marine Corps flag were recently properly retired thanks to the patriotism of two groups at Our Lady of Sorrows Catholic Church. Members of the Monsignor Frank J. Wade Fourth Degree Knights of Columbus Assembly joined forces with Boy Scout Troop 237 to conduct a retirement ceremony for worn flags. For six hours on June 13 at the church Knights collected tattered flags from the public and had replacement flags available for purchase. The evening ceremony began with the Pledge of Allegiance and a presentation by the assembly’s Faithful Navigator Rick Lange and the scouts. Later, the flags were placed into fire as onlookers watched. The preferred way to retire U. S. flags is cutting and burning them. Flags cannot be buried or discarded. †