“So now I give him to the Lord. For his whole life he will be given over to the Lord. And he worshiped the Lord there.” 1 Samuel 1:28 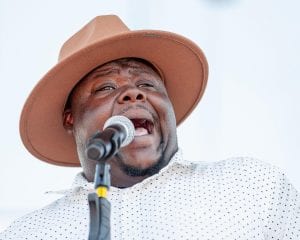 Sanchez Tanniehill is a gospel singer with an amazing story. It all started one day when he was laying down for his daily nap at 6 weeks old. However, he did not wake up at his regular time, so his mother went into his room to check on him. She alarmingly found that his lips had turned purple, so she rushed him to the nearest hospital. The doctor told Tanniehill’s mother that he had spinal meningitis and had suffered a stroke during his nap. For three months he remained in the hospital and doctors told his mother that if he lived, he would be severely disabled and would not be able to walk or talk. Tanniehill’s mother began to pray for a miracle and shares she often prayed 1 Samuel 1:28 over him as a child.

27 years later not only can Tanniehill walk and talk, but he is also singing God’s praises all over the south! Music has always been important to him as a way to worship God and inspire others. He grew up in Alabaster and attended Thompson Middle and High School where he was the school mascot and regularly performed in talent shows. He recorded his first CD in 2003 and also sang at the opening of the Special Olympics in Auburn. Three years later he made it to the second round of American Idol auditions in the Birmingham area. Every day he lives his life thanking God for the blessings that He continues to pour on him. He praises God that He answered his mother’s prayers for a miracle. †