Far from Home: Discovering Your Identity as Foreigners on Earth

Born and raised in India, Mabel Ninan came to the US as a newlywed who was confident, equipped, and ready for adventure. But as the novelty of the experience faded, the struggle of living in an unfamiliar environment began to take its toll. She reached a breaking point and wrestled with questions about her identity and calling. 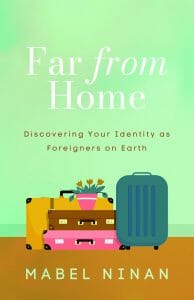 Ninan’s desperate search for purpose, belonging, and rootedness brought her to her knees before the throne of God. It was there that God turned her perspective around, showing her that her struggle was also her strength. She discovered her true identity, as not only an earthly immigrant but also a spiritual one by design, a pilgrim of heaven just passing through. When Ninan began to see herself through God’s eyes and adopted an eternal perspective, her heart overflowed with passion to chase after God’s plans. She felt called to share her message with others on the journey so that they, too, could find the key to a joyful and meaningful life.

In Far from Home, Ninan draws parallels between her immigrant experiences and her God-given appointment as a stranger on earth. Using the stories of biblical immigrant heroes, she sheds light on what it means to truly live as citizens of heaven including:

The book is structured around challenges that immigrants wrestle with the most, which broadly fall into three main categories—identity, home, and community. Each of these three sections is broken down into chapters. A unique feature of the book is that it invites readers to respond at the end of each chapter through prayer and reflection and encourages them to act. Far from Home serves as a guidebook for Christians looking to build a stronger walk with God. This book is for the seeker, the wanderer, the lonely, the desperate, the messed up, the broken. Far from Home is for the stranger, but also for the stranger’s friend.