Worship with MercyMe in Concert! 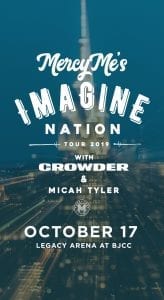 Multi-platinum MercyMe, along with Grammy nominee Crowder and GMA Dover nominee Micah Tyler, will stop in Birmingham on October 17 as part of the Imagine Nation Tour! Recent radio favorites “Best News Ever,” “Grace Got You” and “Even If” are housed on MercyMe’s most current album, LIFER, and will be among the hits included in the powerful evening of music. 2019 has reaped both multiple nominations for the current American Music Award winners. The tour also comes on the heels of the box office hit film, I Can Only Imagine, which is inspired by MercyMe’s Bart Millard’s real-life story behind the beloved MercyMe song. Millard wrote the mega-hit song, “I Can Only Imagine” after the loss of his father. The recent film depicting this remarkable story, directed by Birmingham’s own Erwin Brothers, opened at Number 3 at the box office on March 16, 2018.

Since their debut, MercyMe has sold more than 9 million units in CD, single and DVD sales. “I Can Only Imagine” surpassed 2 million digital downloads in 2014, making history as the first song in Christian music to go platinum and double-platinum in the digital domain. They have sold out venues throughout the United States and Canada, including Radio City Music Hall, and have appeared on the Macy’s Thanksgiving Day Parade, The Today Show, CBS This Morning and more. Purchase your tickets for this unforgettable night of worship at www.ticketmaster.com. †

Scroll back to top
Get More Good News! E-subscribe to Birmingham Christian Family
Sign Up Now!