Same Kind of Different As Me

SAME KIND OF DIFFERENT AS  ME, Always See The Good In Others…

Children seem to resonate with this adage but in an adult-size world, execution proves difficult. Judgment and bias cloud perception, ultimately blurring the heart.  Perhaps no other story of this century better supports this premise than the New York Times bestseller, Same Kind of Different As Me.

Written ten years ago, the book took the world by storm. Published in over 14 languages with nearly a half million copies sold, Same Kind of Different As Me became a beloved novel for children and adults. Now, its author, Ron Hall, has joined a powerhouse team of actors and producers to bring this tale of friendship, forgiveness, and love to the big screen.

Due in theaters October 20, 2017, Same Kind of Different As Me tells the true-life story of an international art dealer, Ron Hall (Academy Award® Nominee, Greg Kinnear, As Good As It Gets, Heaven Is For Real) whose life is crumbling under the pressure of pretense and appearance. Marital infidelity strains his relationship with his wife, Debbie (Academy Award® Winner, Reneé Zellweger, Chicago) and he is estranged from his alcoholic father (Academy Award® Winner,  Jon Voight, Coming Home, Ray Donovan). Debbie digs deep to forgive Ron under the condition they put shared purpose back into their marriage. She encourages Ron to volunteer with her at a local homeless shelter where Ron encounters Denver (Academy Award® Nominee, Djimon Hounsou, Blood Diamond, Amistad), the most unlikely friend he’d ever meet. The narrative follows the lives of these characters as they discover how to risk loving, how to loose life and give till it sometimes hurts.

“This is a story about what love can do,” said Hall. Debbie’s forgiveness of my infidelity required love, and that Christ-like love not only transformed my life but millions of other lives as well.” The repercussions of Ron’s infidelity and Debbie’s subsequent forgiveness served as a model for Ron as he found himself face to face with individuals he normally would dismiss. “At that time in my marriage, I didn’t attend to the fact that we’d started going different directions. Debbie was chasing after God and I was chasing after money. I was not looking for a friend, certainly not one in the form of a big, black, angry homeless man,” recalls Hall. “Denver wasn’t looking for a friend either, especially a privileged white, rich man. In all honesty, I was not rich until I met Denver.”

The beautifully written screenplay by Hall, Alexander Foard, and Michael Carney certainly reflects this truth. At one point in the movie, Denver says, “God don’t give us credit for loving the folks we want to love anyway. No, He gives us credit for loving the unlovable.” Moviegoers see the payout a simple act of kindness and an open heart can have.  “The relationship between Ron and Denver has a lot of different layers,” Kinnear explains. “There’s suspicion, there’s distrust, but over time there’s honesty, and ultimately there is love. In the end, they believe in one another.” Viewers see this same sequence unfold between Ron and Debbie, and Ron and his father.

The film challenges viewers to question the notion that people are forever products of their environment. It is said that the past molds a person, but Same Kind of Different As Me shows how grace can melt a mold and provide an opportunity for new life and new relationships. And it all starts with Debbie. “She believed that kindness begets kindness and her mission was to make a change within the community,” said Zellweger.  “Change begins when one person makes a decision to put their hands on something, or into something that needs fixing, and recognizing their own ability to have an effect.”

Debbie’s impact on Denver is powerfully depicted in the film. Viewers first encounter an intimidating, loud homeless man wielding a baseball bat and threatening others. Debbie looks past Denver’s callousness, into a tender spot in his heart. “Denver suffered at the hands of other people all his life,” said Hall. “How he came to trust Debbie and subsequently me, can only be explained by the power of love.” Zellweger echoes, “What an exceptional person that she’s able to see people in their best light.  She looks past whatever damage causes them to be fearful in the world and act out. It’s inspiring.”

The unique fabric of this story is that there is no central character.  All four main actors interact to unfold a tale that at onset seems unbelievable. Perhaps the finest cinematic moments come when Denver shares dollops of wisdom or “Denverisms” as they’ve come to be known. Things like, “Our limitation is God’s opportunity.” Or, “When you get all the way to the end of your rope and there ain’t nothin you can do, that’s when God takes over.”

Hounsou is simply dynamic in the film.  Having his own brush with homelessness at a young age, the actor draws from personal experiences to give a compelling performance. “Denver is not talkative but when he opens his mouth, he seems to say a lot,” reflects Hounsou. “It’s a rare opportunity for an actor to be blessed with a role so soulful. To embody Denver’s spirit was at once an emotional challenge and an extreme privilege, learning the story of a man who came from so little and gave so much.”

Silence mixed with well-placed words—often grammatically incorrect but always life-altering—made Denver bigger than life. Those who had an opportunity to meet Denver before he passed recall a gentle giant filled with wisdom that seemed to flow from Christ. As one woman recalls, “Everything about my life, how I viewed myself and others, changed when I encountered Denver.” Hall concurs, “I marveled at Denver’s counsel and sought him out for advice time and again. I tell you, he was always spot-on with a fresh message from God. He spent countless hours behind a dumpster, in solitude talking with God.”

From Script to Screen 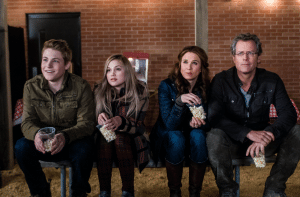 The movie, Same Kind of Different As Me, was seven years in the making and nearly bankrupt Hall in the process. When asked why he didn’t just abandon the project and enjoy the success of his best-selling novel, Hall explains, “I made Debbie a promise that I’d never abandon Denver and I’d champion the homeless. In fact, Debbie and Denver inspired me to make a movie that would keep our message alive.” Since launching the movie, Hall and his family have set up, samekindofdifferentasme.org., a nonprofit organization that serves as a sort of 911 call center for underfunded missions and homeless endeavors. Their mission is to raise money, goods and services for organizations that serve the homeless, abused, addicted and hungry. “It’s not the color that divides us. It’s the condition of our hearts.  If we get our hearts right we can cause a rising tide and bring hope to those who’ve lost it,” says Hall.

-Susan Reinfeldt, Author & Owner of The Write Word. Five years ago, Susan had the honor of working alongside Denver and Hall to raise money for The Nashville Rescue Mission, an organization she continues to passionately serve.