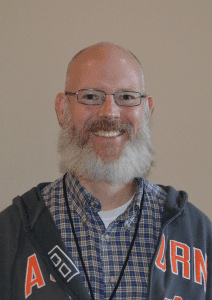 Chap Womack completed his first Mercedes Marathon in February. He now has his sights set on a triathlon competition that will require him to swim 1.5 miles, bike 56 miles, and run 13 miles. This chemical engineering graduate of Auburn University has shown that he can do anything he sets his mind to- except free himself from the death grip of alcohol on his life.

Womack grew up in a good Christian home. He went to church consistently with his family. He accepted Christ as his Savior in the 8th grade. He was active in his youth group until his high school graduation. Womack and his future wife, Jana, began dating in high school and married after college. Once married they lived and worked in several cities- Jana as a nurse and Chap as an engineer. Womack’s life seemed to be an envious one. They had a son and moved back to Auburn for a new job. “I had been a social drinker during college,” Womack said, “and drinking was not presenting any problems.” It was not until Womack began to hide his drinking from his wife that he began to think that alcohol was becoming too much in his life. “Any time you begin to secretly drink, it is a problem.” Womack continued his journey into a deeper dependence on alcohol for the next several years. He finally reached a point where he approached his wife and said, “I need help.”

Womack tried two conventional treatment centers but the experience produced little change. He knew he was approaching a fork in the road. About this time, one of Womack’s brothers began volunteering at Brother Bryan Mission (BBM) in Birmingham. His brother began to see on a regular basis the results that the residential recovery program at BBM was producing. Soon after, Chap Womack was in an auto accident and his wife knew that was enough. She told him, “Pack your bag, you can’t stay here any longer.” His family intervened and because of what his brother was seeing at BBM, they brought him to the mission. “I was shocked when I was dumped out at this place. I did not know what to think. I was now living in a rescue mission.  Guys like me don’t end in up in places like this,” said Womack.

Within the first week, Womack cried out to God in anger saying, “You screwed me.”  The response that came back was, “I don’t know you.” “That scared me and shocked me,” Womack said, “I began to listen.” Three months into the nine-month program, Womack turned his entire life over to Jesus. “I have a joy and peace that I have never felt,” Womack says. A recent testimony by Jana Womack speaks to the journey the family has experienced.  She said their daughter summed up the change in her husband by saying, “Dad’s funny again.”

Concerning the future, Womack says, “I am open to whatever God wants for me…My family is too. I know they would rather have a sober me than a paycheck from someone who is drinking all the time. I cannot thank Brother Bryan Mission enough for giving me and my family a new chance at life.”