Since the final season of  Duck Dynasty aired three years ago, family patriarch Phil Robertson has been shocked by the number of people still hoping for a taste of West Monroe, Louisiana preaching and an Ouiachita River baptism. When fans find him (and find him, they do), he invites them for a meal and then uses the book of Acts as a guide for the rest of their day. “If you had seen the mighty throng since Duck Dynasty that we’ve baptized, you’d be stunned,” Robertson says, noting it’s not unusual for him to perform a marriage on the same day. “We explain to them how serious marriage is, so we marry ‘em right here on the living room floor. Then we share the Gospel with them… [and] take ‘em down by the river… and they go on their way rejoicing.” It’s a momentary glimpse into the Robertson’s life: simplicity, Scripture, family, nature. In a way, it’s the antithesis to the violence and immorality Robertson says is destroying mainstream America.

In his new book The Theft of America’s Soul (Thomas Nelson), Robertson responds to the 1966 Timecover that posed the question “Is God Dead?” When he saw the magazine as a college student, the question reflected dialogue he had heard among peers and professors at Louisiana Tech University. It was suggested that rejecting a belief in God would free man to be his own judge, define his own truth and virtues, change laws that seem inconvenient, and chase self-gratification. It’s this very way of thinking, Robertson writes, that primed our country for mass acts of violence and celebration of sexual sin. It’s the same way of thinking that drove him to “the drugs, the drinking, the sleeping around” that devastated his family in his early 20s. And yet the freedom he was chasing only led to a prison of shame.

During the writing and production of his book, Robertson witnessed media coverage of the mass shooting from a Las Vegas high-rise hotel, the dismissal of Matt Lauer from NBC’s Today Show, and a violent neo-Nazi march in Charlottesville, Virginia. In response, Robertson recalls John, Chapter 8, when Jesus hints that his Jewish opponents in the temple courts are doing the work of Satan, not the work of God. Many Americans think they are committed to something important, but they don’t quite know who they are working for, Robertson says. “It’s not the human beings that we’re wrestling with, it’s the evil one in them. He’s the father of lies; he’s the father of murder. We’ve killed 60 million of our own children in their mother’s womb. It’s the lies the evil one whispers in our ears: Make it legal! Make it legal! We practice perversion and we flaunt it in front of America.”

A Need for Male Leadership.“Overall in America, we have lost our family structure and the fear of God. We’ve lost it,” Robertson says. “And just look at us now, it’s a sad thing to watch.” Calling his family a “patriarchal system,” he suggests strong male leadership grounded in Scripture is not a picture of tyranny, as has been suggested by his critics, but a picture of direction and peace in his family. Robertson is now 72 years old, and his children have children of their own, but living in close proximity and teaching them to respect wisdom from their father in their youth set them up for the relationships they maintain today. “We’re still all together all the way down to we hunt together, we pray together, we sing together, and we’re still a tight family structure,” he says. Each of his sons has thanked him in adulthood for making the Bible central in their childhood because they felt prepared to train their own children.

Another priority for Robertson as a father was being an example of how to treat a woman. “The greatest thing about what I had to show my sons was I loved their mother. They had to see that,” he recalls. “And they saw the way I treated Miss Kay when I became a Christian. You gotta remember, I didn’t become a Christian until I was 28. I almost waited too late because two of my sons was already here. They were young, so I was able to rebound in time and start applying godly principles.”

Peace of Mind. In The Theft of America’s Soul, one of Robertson’s most powerful charges to readers comes at the end of Chapter 4, on appreciating God as the creator of all life: “Partner with the Almighty in tending to life…. as you see the beauty of God in his nature, recognize the beauty in the life of your fellow man also. See how he was created in the image of God.” Walking alone in the woods, watching deer run through a trail, Robertson says, it’s hard to sin. “We’re down here on the river, and among us, we never hear any profanity, we never hear fits of rage–nothing, zero. We’re withdrawn somewhat, but we’re still reaching a lot of people in a public way… we’re still getting the Gospel preached.” In a way, he writes later, “sin management in isolation is easy.” 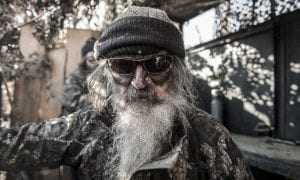 Robertson asserts that his family’s lifestyle- intentionally simplistic in hunting for their meals, sharing the Gospel, and training their children–is a picture of comfort. It’s the opposite of the chaos that’s the result of sin. “I’ve learned what a rare commodity peace of mind is. And that’s what God gives you, peace of mind while you’re on the earth and immortality in the end,” he says.

For Americans who find themselves tangled in the lies that bring chaos, Robertson adds, the only way to be free and experience true peace of mind is to have an encounter with the living God. “Once you understand and embrace the bad news, the good news really is great news. All my sins removed and never counted against me. None of my future ones counted against me because He’s at the right hand of the father mediating for me,” he says. “He’s given us His spirit so that we can be loving and kind and peaceful and patient and good. I keep waiting on someone, and I ask these various audiences, if they have a better story. So far, no one has come up and topped that one.”