Adoption as a Calling: Duck Dynasty

Adoption as a Calling: Duck Dynasty

According to Duck Dynasty stars Korie and Willie Robertson, 100,000 children currently in the foster care system in the United States are adoptable because their parents’ rights have been terminated. Statistically, 30,000 of those children will never get a “forever family.” The couple has been passionate about adoption since high school and has welcomed three different youth into their home since 2001—an infant, a foreign exchange student and an older child from foster care. In honor of National Adoption Awareness Month, Korie reflects on the beauty of an intentionally large family, the need for adoptive families in the United States, and the re-release of her book Strong and Kind, with added material in honor of newest family member Rowdy, officially adopted last year at 12 years old.

Growing up in a family that made hospitality a priority gave Korie a clear model of the kind of mother she wanted to be when she had a home of her own. During her childhood, her parents hosted more than 80 people who needed a temporary place to live. “We had an extra bedroom that was always full,” she remembers. “They took in families, teenagers that were struggling at home, or single mothers with kids. That really impacted me—to say what’s mine is yours, and if I have an extra room, then someone can have it.” Korie’s first exposure to the adoption process came from her high school Bible teacher, who adopted a little boy her senior year and spent much of instruction time talking about how important it is that Christian families care for orphans. She married Willie in 1992, and after John Luke and Sadie were born, becoming pregnant a third time proved difficult. They took it as a sign that it was time to adopt. Five-week-old Will was living with a foster family in Baton Rouge, Louisiana, when they brought him home in December 2001. In January, Willie surprised Korie with a 10-year wedding anniversary trip to Cancun. She came back pregnant with Bella. “I had two babies on my hip for a while, and it was a lot of fun,” Korie remembers. “It was a little crazy because of Destructo 1 and Destructo 2. They got into everything.”

The next invitation the Robertsons extended to a youth in need of a home was to a foreign exchange student. Sixteen-year-old Rebecca came from Taiwan for one year of high school in 2005. Korie and Willie invited her back the following year, and she never left. Now 28 years old, she had Willie walk her down the aisle at her wedding last year. “Her dad passed away when she was 11, but she still has a mom in Taiwan,” Korie explains. “Her mom was at the wedding, and we sat beside each other as mothers of the bride. So, we are her American family. We never officially adopted her, but she’s ours just like the rest.”

In 2015, Korie had just published the book Strong and Kind and was speaking at an adoption fundraiser when presented with the 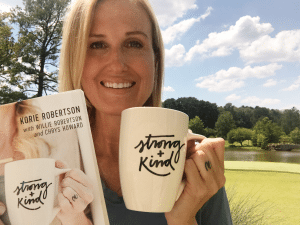 opportunity to provide a permanent home for an older child from Texas foster care. Familiar with the struggles older children often have finding a home, a woman approached her at the event and asked if she knew of anyone who would take a 12-year-old boy. “We hadn’t really planned on adopting again, but we’ve always remained open to God’s tugging on our heart. It was one of those moments that I thought, ‘Alright, God. This is probably us. I called Willie and he said, ‘Why not? We can do this. Why not us?’ We got Rowdy a few weeks later, and he became ours last September officially. He makes six.” Korie explains that bringing an older child into the home and adjusting him to sibling relationships had its challenges but also its rewards. “It’s been incredible to see how our other children have responded to him and accepted him and loved him. At one point Will looked at me and said, ‘Mom, have you noticed that me and Bella don’t fight anymore?’ It was like we all had a greater purpose and everyone just stepped up to the plate.” Rowdy had been raised an only child, and Korie admits that looking back she realizes the transition he had to make—into a family of brothers, sisters, cousins, aunts, uncles and grandparents—was monumental. “There was a point where I asked him, was it harder or easier than you thought it was going to be? I said you can be honest. He said it was harder.”

After 11 seasons on A&E, the final episode of Duck Dynasty aired in April 2017. Today Korie continues to work in the Duck Commander® business overseeing licensing for the family’s brands and does philanthropic work as a board member for The Congressional Coalition for Adoption Institute and Help One Now, an organization dedicated to ending extreme poverty and providing care for orphans worldwide. Korie and Willie also founded the Drive Adoption fund at last year’s Duck Commander 500 NASCAR race at Texas Motor Speedway. DriveAdoption.org gives fans the opportunity to learn about domestic and international adoption, connect with adoptive organizations, and donate financially to the cause.

Korie regularly speaks on behalf of older children waiting to be adopted and says youth who turn 18 and age out of foster care are at a much higher risk for homelessness, early pregnancy or drug addiction than those who gain the support of a family. She stresses that for all the wealth in the United States, finding a home for the 100,000 foster youth currently available for adoption should be simple. “We should be able to have homes for those children. They are going to bed each night thinking, ‘Am I going to get a mom and dad? Is this going to happen for me?’ There’s a lot of problems in the world that I know I cannot fix. This is one of the problems that is really solvable,” she says. “A lot of people are scared of what it looks like bringing in an older child and how the rest of the children will reac. God doesn’t give us a spirit of fear but one of power that He will take care of our needs. Not that it’s going to be perfect or simple, but raising children biologically isn’t perfect or simple [either].” 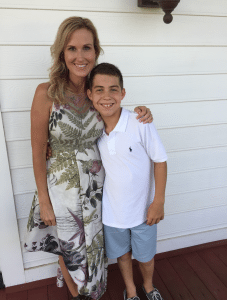 Adopting Rowdy inspired Korie to rerelease a paperback edition of Strong and Kind this year, with additional content reflecting on the legacy she wants to pass down to the next generation. The Afterward is a nod to Rowdy’s assimilation into the Robertson family and how adoption is symbolic to the Christian faith. “I have always loved everything about adoption,” she writes. “How it makes families whole; how it is full of hope and promises to love a child forever and always… how it redeems something broken and makes it whole; how it reminds us that we all are adopted as sons and daughters into God’s family through His Son, Jesus Christ…how it has made our family complete.”

Click here to read more about the Duck Dynasty Family.